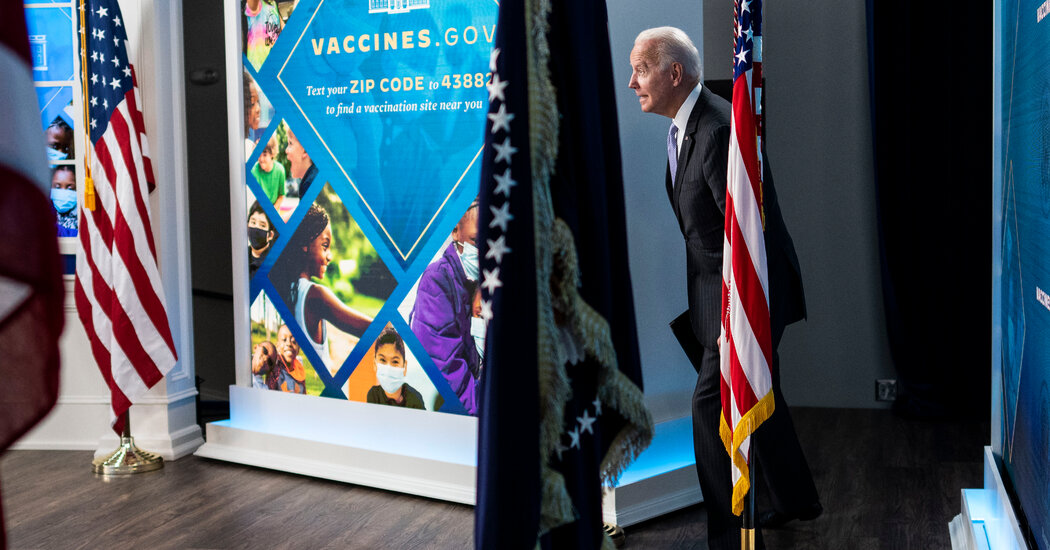 WASHINGTON — President Biden on Wednesday said migrants separated from family members at the border would not receive hundreds of thousands of dollars for the damage inflicted by the Trump-era policy, rejecting an option for monetary compensation that had been floated in negotiations with lawyers representing the families.

Representatives of the migrant families and government officials had discussed giving families $450,000 for each member affected by former President Donald J. Trump’s “zero tolerance” policy, which led to the separation of about 5,500 children from their parents, according to people familiar with the matter. But when asked on Wednesday about compensating the migrants, Mr. Biden denied the option was on the table.

“$450,000 per person? Is that what you’re saying?” Mr. Biden said when asked by Fox News reporter Peter Doocy about the payments. “That’s not going to happen.”

Mr. Biden made the comment as he took questions after touting the forthcoming availability of vaccines for children. The remark was swiftly condemned by the American Civil Liberties Union, which is negotiating on behalf of the separated families.

“If he follows through on what he said, the president is abandoning a core campaign promise to do justice for the thousands of separated families,” Anthony Romero, the executive director the A.C.L.U., said in a statement. “We respectfully remind President Biden that he called these actions ‘criminal’ in a debate with then-President Trump, and campaigned on remedying and rectifying the lawlessness of the Trump administration.”

Mr. Romero also acknowledged that Mr. Biden may have been caught off guard by the question and may not have been aware of the details of ongoing negotiations with the Justice Department.

The comments, however, also amounted to the second time in recent weeks the president has spoken about pending Justice Department actions. After Mr. Trump repeatedly interfered in the department’s affairs, Mr. Biden made restoring independence to the agency one of his goals.

Asked about the president’s comment on Wednesday, Dena Iverson, a spokeswoman for the Justice Department, said “the department will not comment on ongoing litigation.”

Mr. Biden said last month that the Justice Department should prosecute those who defy subpoenas from the House committee investigating the Jan. 6 attack on the Capitol, a comment he later walked back during a CNN town hall.

“The way I said it was not appropriate,” Mr. Biden said.

In the negotiations with the administration, which were first reported by The Wall Street Journal, lawyers representing the migrants have argued that the United States government wronged the families by separating parents from children. In addition to financial compensation, the A.C.L.U. is also trying to reach a settlement with the government that would provide, among other things, a pathway for the families to remain in the United States and receive social services.

The Biden administration’s handling of rising illegal border crossings has received criticism from Democrats and Republicans alike. To contend with the record number of crossings, Mr. Biden has continued to use a Trump-era border policy that rapidly turns away many migrants at the border without providing them a chance to ask for asylum in the United States. The administration has said the policy is necessary to contain the ongoing pandemic.

The deterrent approach has also prompted fierce debate within the administration, with some of Mr. Biden’s top aides favoring stronger policies to contain the crossings, while others support a more welcoming stance to make good on the president’s campaign pledge of restoring an asylum program at the southwest border.