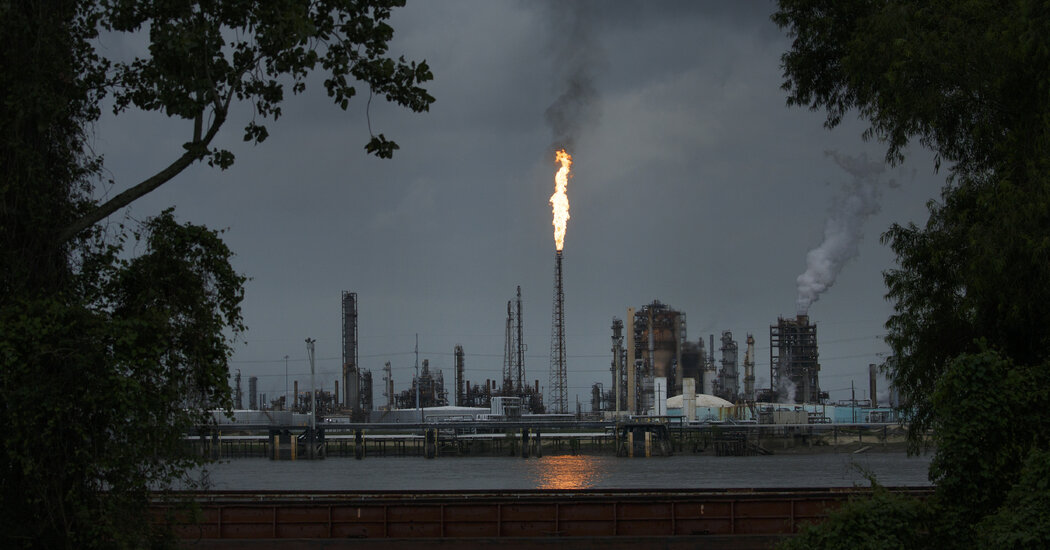 GLASGOW — The Biden administration said Tuesday that it would heavily regulate methane, a potent greenhouse gas that spews from oil and natural gas operations and can warm the atmosphere 80 times as fast as carbon dioxide in the short term.

For the first time, the Environmental Protection Agency intends to limit the methane coming from roughly one million existing oil and gas rigs across the United States. The federal government previously had rules that aimed to prevent methane leaks from oil and gas wells built since 2015, but they were rescinded by the Trump administration. Mr. Biden intends to restore and strengthen them, aides said. Older oil and gas rigs tend to leak more methane than new systems.

The announcement came as more than 100 nations around the world joined together at a United Nations climate change summit here to promise to curb global emissions of methane 30 percent by 2030. If they succeed, that will be the equivalent of eliminating emissions from every car, truck, airplane and ship, said Fatih Birol, executive director of the International Energy Agency.

“This is huge,” Mr. Birol said at an event where countries outlined their methane plans.

President Biden called the agreement a “game-changing commitment” and insisted the new efforts will help create jobs to manufacture technologies for methane detection while employing pipefitters and welders to cap abandoned wells and plug leaking pipelines.

“It’s going to boost our economies,” he said.

Mr. Biden is in Glasgow this week for a United Nations climate summit, where he is trying to persuade other countries to reduce emissions from fossil fuels that are heating the planet to dangerous levels.

The methane announcement comes as Mr. Biden faces intense pressure both internationally and at home to show that the United States, the nation that has pumped the most greenhouse gases into the atmosphere, is serious about mitigating climate change.

Mr. Biden has set an aggressive target of cutting the emissions produced by the United States this decade about 50 percent below 2005 levels, but legislation to help him meet that goal is stalled in Congress. That leaves the administration to rely on regulations and other executive action.

The White House on Tuesday also announced other new climate initiatives, including a plan to protect tropical forests and a push to speed up clean technology.

The centerpiece, however, is the proposed E.P.A. regulation on methane.

Methane is the second most abundant greenhouse gas after carbon dioxide, and it’s responsible for more than a quarter of the warming the planet is currently experiencing. It dissipates from the atmosphere faster than carbon dioxide but is more powerful at heating the atmosphere in the short run.

An odorless, colorless, flammable gas, methane is produced by landfills, agriculture, livestock and oil and gas drilling. It is sometimes intentionally burned or vented into the atmosphere during gas production.

As concentrations of methane in the atmosphere have increased, environmentalists have grown increasingly concerned about its role in climate change.

According to the E.P.A., the regulation, once finalized, will reduce 41 million tons of methane emissions from 2023 to 2035, the equivalent of 920 million metric tons of carbon dioxide. That is more than the amount of carbon dioxide emitted from all U.S. passenger cars and commercial aircraft in 2019, the agency said.

But Republicans in Congress said Mr. Biden’s promises in Glasgow would hurt Americans at home. “The president wants to kill abundant and affordable U.S. energy sources like oil, natural gas and coal that Americans depend on,” Senator John Barrasso, Republican of Wyoming, said in a statement. He called the White House plans “a recipe for disaster” that would lead to a shortage of affordable energy.

Senator Shelley Moore Capito, Republican of West Virginia, criticized the methane regulations saying they “demonize an industry that is part of the lifeblood of our economy.”

The oil and gas industry is divided over the methane regulations.

David Lawler, the president of B.P., said in a statement that the oil company “applauds” the new rules. The company called the move “a critical step toward helping the US reach net zero by 2050 or sooner” and said regulating methane emissions will help prevent leaks.

Ms. Harbert noted that methane emissions from natural gas had declined 73 percent since 1990. But, she said, “we recognize we need to button up and get to that last percentage.” She called regulation “the best possible approach” to creating standard rules across the industry.

Small oil and gas producers, however, are worried that the new rules will create onerous burdens that will put them out of business. The American Petroleum Institute hedged, saying in a statement that it supports the regulation of methane but is refraining from commenting on the new rule.

The proposed regulations could take time to put in place, are likely to face legal challenges and could be reversed by a future administration, observers say.

“As a president tries to use unilateral executive powers, there are immediately a set of hurdles,” said Barry Rabe, a professor of environmental policy at the University of Michigan. “It’s not going to be an easy transition.”

When methane is released into the atmosphere, it is frequently accompanied by hazardous chemicals like benzene and hydrogen sulfide. Exposure to those pollutants has been linked to serious health problems including asthma and cancer.

Sue Franklin knows the effects firsthand. She and her husband, Jim, used to live in the West Texas town of Verhalen, where oil and gas drilling operations took off around 2014.

The Franklins eventually moved about 40 miles away, but Ms. Franklin, 70, said she feared she would have respiratory problems for the rest of her life.

“It’s never going to get better; the damage has been done,” Ms. Franklin said when she and her husband traveled to Washington, D.C., to protest new fossil fuel projects. Ms. Franklin said she thought new regulations governing oil and gas wells would help, but only up to a point.

“We were the lucky ones,” she said. “We got out. Other people still live with this. I’d like to see them actually shut down.”

The oil and gas industry is united against a separate effort in Congress to impose a fee on methane leaks from oil and gas wells as part of a broader budget bill.

The methane fee is designed both to raise revenue and to lower greenhouse pollution. Experts said that the double-pronged approach was necessary to shut down methane emissions.

Oil and gas producers are lobbying hard to remove the methane fee from the legislation that is pending on Capitol Hill.

Anne Bradbury, chief executive of the American Exploration and Production Council, which represents oil and gas companies, said: “This new, poorly constructed natural gas tax, on top of regulatory costs being imposed through compliance with forthcoming E.P.A. methane rules, would be additional costs and punitive taxes that would disadvantage American producers, increase Americans’ energy costs and cause 90,000 jobs lost across the country.”

She called the E.P.A. regulatory process “the appropriate way to address methane emissions in the U.S.”

Methane regulations have a fractured history in Washington.

President Barack Obama first proposed rules to reduce methane from new and modified gas wells in 2016, and finalized them on his way out of office. Republicans tried but failed to kill them in 2017 by using an obscure law known as the Congressional Review Act, which allows lawmakers to overturn rules within 60 legislative days after they are finalized.

In April, Democrats tried their hand at deploying the Congressional Review Act and were successful, voting to kill Mr. Trump’s rollback.

According to the E.P.A., the proposed rule will create a monitoring program under which companies will be required to find and fix methane leaks, often called “fugitive emissions,” at new and existing well sites and compressor stations.

“This is not about rocket science,” Mr. Brownstein said. “This is auto mechanics.”