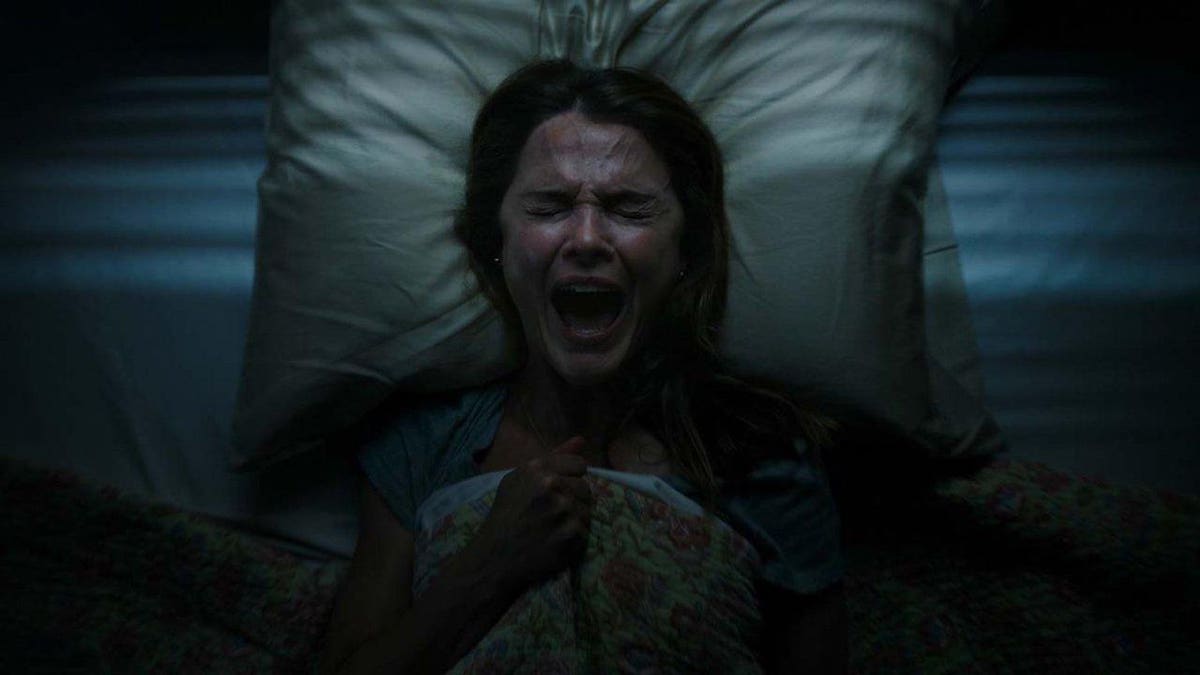 The term ‘monster’ is often used quite frequently in one of two ways. First, it often signifies an entity that violates what we consider to be the natural order—category bending, beyond the pale of normal experience, frequently dangerous. Second, we call a human ‘a monster’ when they do something monstrous, something hideous that violates our understanding of what humans ought to do. At its most fundamental, Scott Cooper’s Antlers (adapting a story by Nick Antosca and co-produced by Guillermo del Toro, David S. Goyer, and J. Miles Dale) is about monsters of both varieties.

Keri Russell plays Julia, a teacher recently returned to a small Oregonian coastal town after a sizable absence. She lives with her grown-up younger brother Paul (Jesse Plemons), now the town’s sheriff, with the two forever bound by the dark secrets of an abusive, now dead, father. Her background makes her finely tuned to seeing the subtle signs of abuse, so when she sees them on 12 year old Lucas (an impressive Jeremy T. Thomas) it isn’t something she can merely let go. The signs are there: sullen, withdrawn, ill-kept, unfocused, with the sunken, danger-seeking eyes of a child who sleeps to little and looks for threats too much.

Lucas’ story is dangerous, sure, but a little more complicated. His father used to be a loving but irresponsible dad, making ends meet after the death of his wife by cooking meth up in an abandoned mine. After an attack by something mysterious, Lucas’ father has gradually started to turn into something dangerous. Something monstrous. Something that has to be kept locked in the attic of their home alongside Lucas’ younger brother, also tragically infected. Lucas isn’t abused in any traditional sense, but spends his days hunting game for his monstrous father and his nights ignoring the inhuman screams, banging, and smells of the decaying house he once called home.

As a whole, all the performances involved land, with Russell and Thomas delivering stand-out performances. Thomas is particularly phenomenal and it deserves reiterating—how such a young, new performer achieved such complex depth is surprising and exceptional. The writing generally lands (one or two scenes in the first act felt a little too clunky with exposition), but as a whole it’s a well performed, well written endeavor.

On a technical standpoint the film excels. Florian Hoffmeister’s cinematography is gorgeous; it captures the bleak, foggy, Oregon-type atmosphere with an adept command of tone and a bleak yet beautiful, appropriately colorful feeling throughout. Dylan Tichenor’s editing is tight and ably paced, while Tim Grimes’ productuction design, Hamish Purdy’s set decoration, and Cheryl Marion’s art direction all build an extremely eerie, lived in world.

Most importantly for a film like this, to me, is the creature, and the film’s wendigo (borrowing explicitly from well-researched Native American folklore) is sincerely one of the best creature designs since The Ritual. It’s stunning (shout out to creature concept designer Guy Davis), with a visage that feels detailed and appropriately otherworldly (along with a wonderfully executed gradual transformation). And for the record, it’s scary. One particular scene scared this reviewer more than any singular scene in any horror film this year… it’s an absolute marvel. If they make a figure of this magnificent beastie, sign me up.

That said, the film’s thematic material, while well grounded by some exceptional performances, is conceptually muddled. There’s an overt parallel here between the monstrosity of the father’s transformation along with patterns of family trauma (in practice it reads like a parallel between his growing monstrosity and abuse, specifically). In consideration of its effects on Lucas’ brother, however, the abuse parallel falls flat while the heritability of trauma angle (if that’s the interpretation) feels uncharitable to victims of trauma. Undoubtedly this is unintentional and it’s not exactly damning given that the movie lands on so many other fronts, but it’s still an odd choice that could be more thoroughly interrogated in a review more willing to spoil central plot points.

As a whole, however, Antlers is great. Keri Russell and Jeremy Thomas make it impossible not to feel for young Lucas, it’s technically gorgeous, and the beast itself is *chef’s kiss*. Do not sleep on seeing it in theaters, and prepare not to sleep afterwards either.