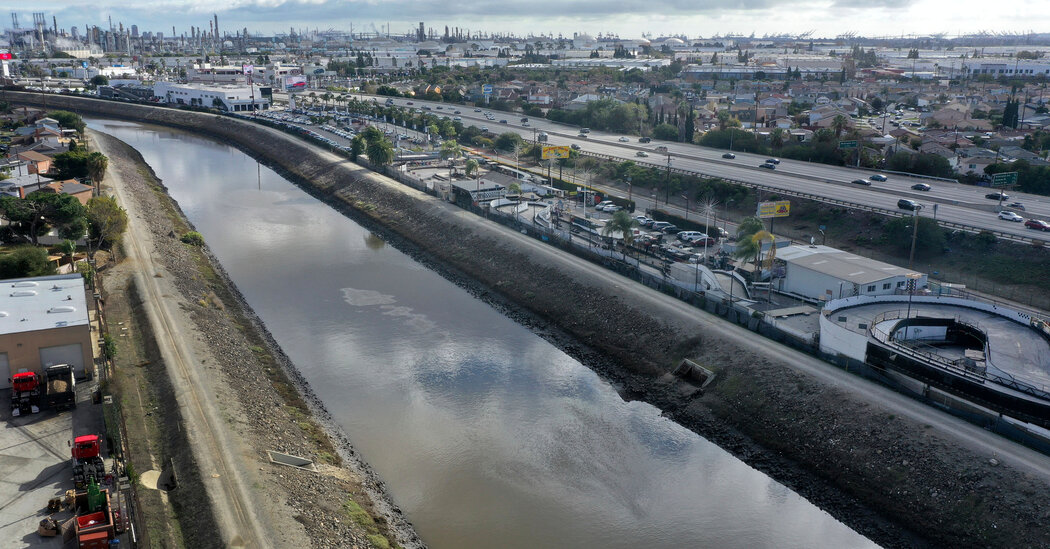 About eight and a half million gallons of untreated sewage have spilled into a flood-control waterway in Los Angeles County since Thursday afternoon, prompting at least five beaches to close, an official with the Los Angeles County Sanitation Districts said.

“It is a lot,” said Bryan Langpap, a spokesman for the agency. “That’s the biggest spill we’ve ever had.”

The spill began after a concrete pipe 48 inches in diameter in Carson, Calif., collapsed. The sewage leaked out of a manhole on 212th Street on Thursday evening and much of Friday, Mr. Langpap said.

From there, the waste traveled through storm drain pipes and toward the Dominguez Channel, a flood-control waterway that runs more than 15 miles from Hawthorne, Calif., and discharges into Los Angeles Harbor. Water from the channel eventually flows to the Pacific Ocean.

Officials are investigating what caused the pipe, which was built in the 1960s, to collapse.

“We actually have a project in construction now that was going to replace this sewer; that project isn’t done,” Mr. Langpap said. “So I’m sure it was related to age, but what was the straw that broke the camel’s back, we don’t know yet.”

At least five beaches were closed on Saturday, according to the Los Angeles County Department of Public Health, disrupting holiday plans and leading to the cancellation of some events, such as the 70th annual Polar Bear Swim at Cabrillo Beach.

Dr. Anissa Davis, the Long Beach City health officer, said in a statement on Friday that inspectors were “monitoring water quality along the affected beach sites,” and that beaches would be closed until the water quality met state requirements.

Untreated sewage and polluted water can expose swimmers to pathogens, according to the U.S. Environmental Protection Agency.

Janice Hahn, a member of the Los Angeles County Board of Supervisors, said on Twitter on Friday that “a spill of this magnitude is dangerous and unacceptable, and we need to understand what happened.”

She added that recent storms in the area, which have brought heavy rain across the state, most likely contributed to the collapse. “We need infrastructure that doesn’t fail when it rains,” Ms. Hahn said.

Since Thursday, crews have set up five sewer bypass pipe systems, which suck sewage out of a blockage and into another manhole, Mr. Langpap said. By Friday night, crews had stopped the spill entirely, he said.

But because the spill was occurring near a freeway, the unclogging process was complicated and prolonged, leading to millions more gallons of waste being spilled, Mr. Langpap said.

“We never want to have a sewage spill,” he said. “That’s our job, is to collect and treat the sewage and protect the environment. So it is a large flow, and we just have to do that monitoring now to see what impact was there.”

On Saturday morning, crews were working on temporarily restoring the collapsed sewer line, and a permanent repair will be done later, though an exact timeline has yet to be determined, Mr. Langpap said.

The Dominguez Channel was the site of another environmental problem this year.

A fire in September at a beauty product warehouse in Carson released a foul stench in the air and chemicals into the sewage system that ultimately drained into the Dominguez Channel. The spill led to the decay of organic materials in the channel, resulting in the emission of hydrogen sulfide gas that far exceeded the state’s nuisance standard, according to the Los Angeles County Department of Public Works.