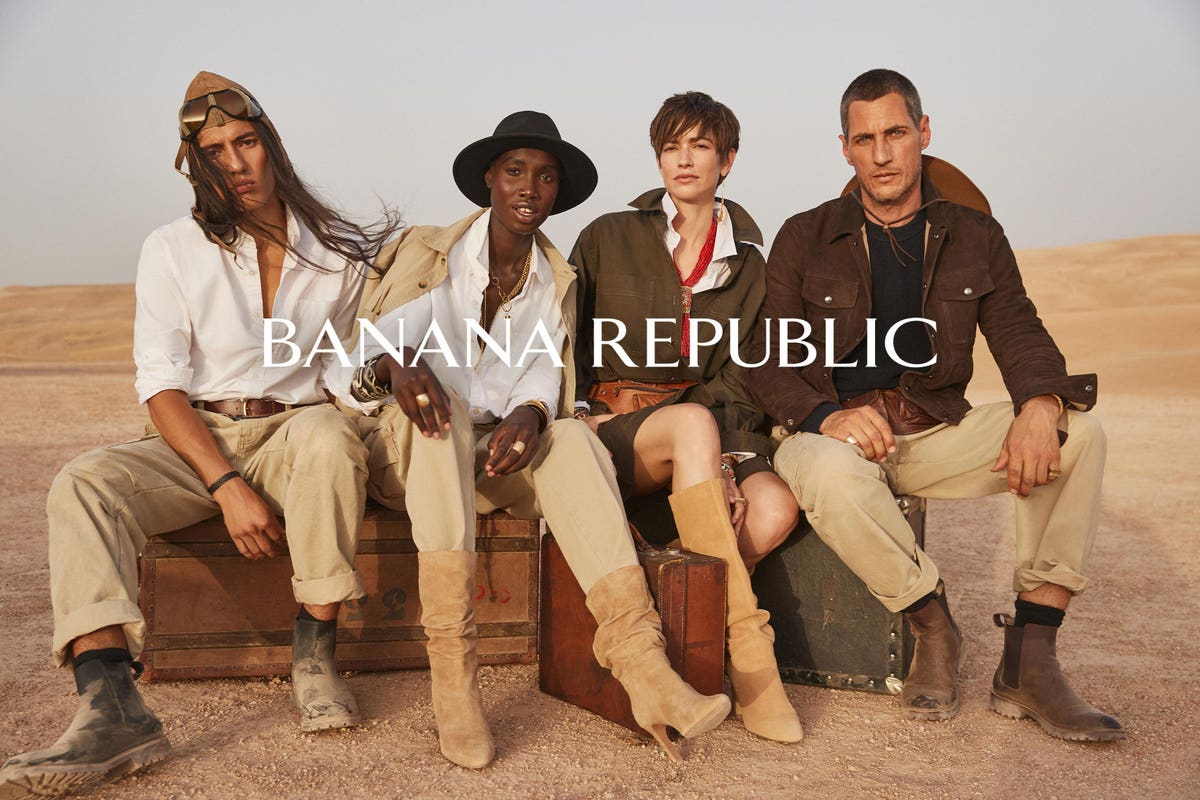 Banana Republic is launching a new brand identity and positioning — “winking at its heritage while reinventing itself for today’s modern world.”

The heritage being referenced dates back to the retailer’s founding in San Francisco in 1978 as a “weirdly wonderful safari brand,” as described in an Adweek profile from 2016. Initially known for its illustrated catalog reminiscent of J. Peterman, stores featuring elephant tusk door handles, live tropical foliage, 17-foot fiberglass giraffes and army jeeps. Banana rode a brief adventurous safari fashion trend that was elevated by movies such as Indiana Jones, Out of Africa and Romancing the Stone.

With preppy fashion taking over in the late eighties, Gap , which acquired Banana Republic in 1983, repositioned the chain as a mainstream, upscale retailer. Only beige khakis seemed to survive from from the safari days. The chain has underperformed for several years and is set to close 130 of its approximately 500 stores by early 2024.

The brand’s return to its roots was praised by RetailWire BrainTrust member Lee Peterson, EVP of thought leadership and marketing at WD Partners, in an online discussion last week.

“Banana Republic got so far away from the original brand premise that I believe they lost their way,” wrote Mr. Peterson. “Not only does the new gear look great, it also resonates with the zeitgeist of comfort, home and longing for travel. I’m (back) on board!”

In the brand’s refresh, the safari heritage can be found in its just-released “New Look” campaign that was filmed in Morocco and features leather and suede updates to the brand’s iconic BR photojournalist vest and cargo pants.

“Should Banana Republic go back to its safari heritage?” wrote Georganne Bender, principal at Kizer & Bender. “Why not? The new styles are modified and updated versions of what one thinks of when you hear the words ‘safari fashions’. I have seen the slick ads and the new lines and I like what I see. But then again, I love a good pair of cargo pants.”

“Yes, it’s great to see a brand with a POV,” wrote Raj B. Shroff, principal at PINE Strategy & Design. “So many of these brands turn into ‘blah’ because they lose their original POV, get diluted, then stand for nothing and mean nothing and are designed for nothing. Banana Republic did some soul searching and discovery to figure out why they exist in the first place. Bring that to the modern era and to me, if done well, this can reinvigorate the brand.”

“I don’t know if it will work for Banana Republic,” wrote Ben Ball, senior vice president at Dechert-Hampe. “But I do know a very similar approach is working for Territory Ahead. There’s always an appeal to adventure.”

The brand will deliver its “Imagined Worlds” campaign on Sept. 28 “reflecting Banana Republic as it was originally conceived — a fictitious, faraway and unknown place to be explored.” Citing Shangri-La, Middle Earth, Westeros or Wakanda as metaphors, Banana Republic’s team considers the premise, “a springboard to redefine fashion, design, activism, sustainability and creativity.”

Banana Republic isn’t swapping the classic cashmeres, wool sweaters and chino pants it’s been selling for the last three decades for pith helmets. Beyond the “San Francisco Imagination” theme tied to its origins, the updated collection reflect two other influences: the “Mythical American Look” dating back to ’50s and ’60s designs and the “Late 1990s” metrosexual look.

“When you see someone in Gucci, you know it’s Gucci,” Ana Andjelic, Banana’s chief brand officer, told The Wall Street Journal. “I want you to be able to see someone and be, like, ‘that’s Banana Republic.’”

Some members of RetailWire’s BrainTrust, however, had concerns that the distinctive new-old look could stray too far afield from customer expectations.

“The big question is, will this move abandon/reject their current core shopper (a la J.C. Penney in the Ron Johnson era), or do they think that this move will bring them closer to that current core?” wrote Nikki Baird, vice president of retail innovation at Aptos. “It’s one thing to revamp your brand, it’s another thing to revamp your brand while also completely changing who you target with that brand.”

Others were not sold on the concept’s promise at all.

“When does a pure nostalgia play ever really sustain itself? Advice – don’t do it, you’ll never capture the spirit of the original,” wrote Stephen Needel, managing partner at Advanced Simulations.

One BrainTrust member, though, suggested a future-facing strategy to keep the novelty from wearing off.

“Nostalgia sells — but only for so long,” wrote Ryan Mathews, CEO of Black Monk Consulting. “So if the nod to the past is it, this won’t work. If, on the other hand, the nod becomes the foundation for defining ‘Adventure Wear for The Future’ — apologies to Ben Ball — then they might be on to something.”