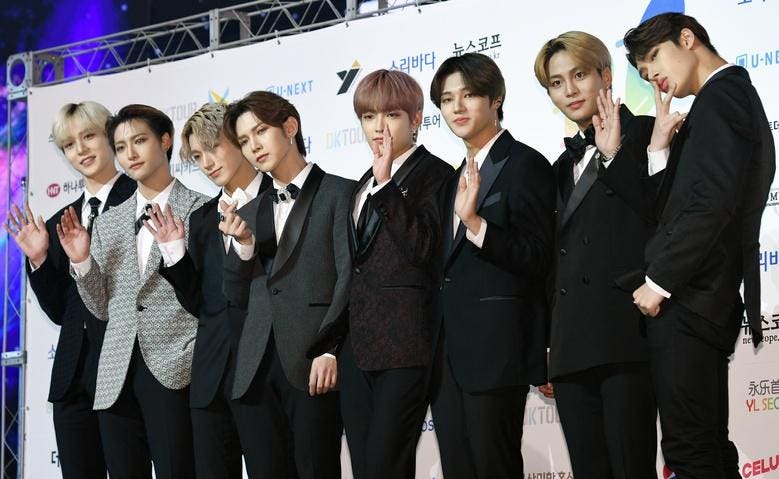 Half of all the titles inside the top 10 on this week’s Gaon Albums chart are brand new to the list, with a healthy mix of groups, both made up of male and female singers, as well as one beloved solo superstar, all collecting new placements inside the region with their just-released collections.

The Gaon Albums chart ranks the bestselling full-lengths, EPs and single albums in South Korea every week, looking at how many copies were shipped to stores.

Leading the way once again is NCT 127, whose new full-length album Sticker runs the show, despite tough competition for the throne. The title is the boy group’s seventh No. 1 on the Gaon Albums chart and their ninth top 10. The set’s lead single, also its title track, earns the loftiest start on the all-encompassing Gaon Digital chart, as it opens at No. 17.

Starting off in the runner-up rung is Zero: Fever Part.3 by Ateez, another one of the biggest all-male vocal acts in South Korea. The band has now sent eight different release into the top 10, hitting the peak spot four times. The project’s lead single “Deja Vu” arrives at No. 49 on the Gaon Digital ranking, bringing the band to new heights on that list. That cut also starts off as the second-bestselling in the country.

Last week’s champion, Lisa’s Lalisa single album, falls from No. 1 to No. 3. The Blackpink singer’s debut solo release is still selling well in South Korea, and the main single (also the title track) lifts more than 20 spots on the Gaon Digital chart to a new high of No. 64.

BTS occupy two spaces inside the top 10 on this week’s Gaon Albums chart, which isn’t unusual for the biggest band to emerge from South Korea. The septet’s Butter single album slips one rung to No. 4 as Love Yourself: Answer returns to the loftiest tier on the tally, placing at No. 10.

Back inside the top 10 for the third time in his solo career is Wonho, formerly of the band Monsta X. The talent lands another hit EP with Blue Letter, which comes in at No. 5. It’s the lowest-charting of his trio of releases, but these are still early days for his run as a standalone superstar.

As they gear up to release another new collection next month, Enhypen break back into the top 10 on the Gaon Albums chart with Border: Carnival, which rockets 30 spaces to settle at No. 6.

Boy group A.C.E starts their new studio set Changer: Dear Eris at No. 7, making the reissue their sixth placement between Nos. 1 and 10 on the weekly sales count.

The final brand new entrant inside this week’s uppermost space on the Gaon Albums chart comes from girl group Mamamooo, whose first greatest hits compilation I Say Mamamoo: The Best kicks off its time on the tally at No. 8. The title is the band’s fourteenth to appear somewhere in the upper reaches of the ranking.

Also back inside the top 10 for another go is Tomorrow X Together’s The Chaos Chapter: Fight or Escape, which earns one more stay within the tier, landing just ahead of BTS’s second current winner.

MORE FROM FORBESAteez Scores Their First No. 1 On A Billboard Chart In AmericaBy Hugh McIntyre

No. 9 – Tomorrow X Together – The Chaos Chapter: Fight or Escape