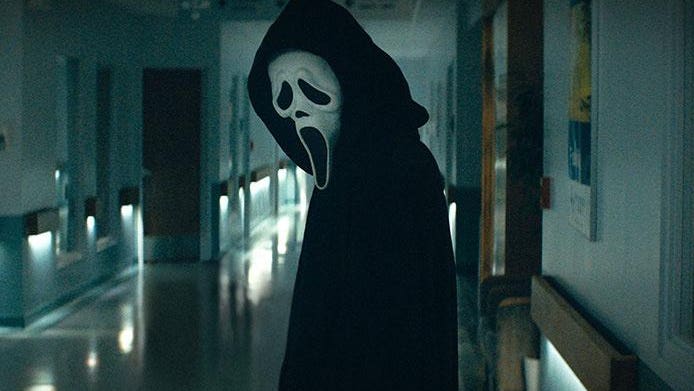 You know how this works. With the new Scream opening tonight theatrically nationwide, I am using science, math and dark magic to correctly rank all five theatrical Scream films in order of “very bad” to “excellent.” As always, this list will not be your list, unless it is, because what fun would that be? Oh, and while I will tread lightly in terms of Scream 5 spoilers, the first four films are fair game. And now, without further ado…

The film opens well, with a shocking major character death, and you can see the $40 million budget on the screen. Cultural aftershocks of the Columbine school shooting torpedoed Kevin Williamson’s original ideas for the threequel. Heck, the film’s closing bit about personal responsibility feels like a direct rebuttal to a year of post-Columbine hysteria. Instead of a disconnected teen melodrama dealing with how the generation of kids affected by media coverage of the initial two killing sprees, we got Ehren Kruger’s campy and generic Hollywood comedy featuring cartoonish actors, actresses and filmmakers being killed off as they went about making a third Stab film. The neutered final product (the violence is so tame and bloodless that it could probably air unedited on network television) undercuts the raw simplicity of the first movie.

Parker Posey gives it her all, and Neve Campbell (who is mostly MIA for the first hour) offers far more gravitas than the film deserves, but the Hollywood schtick was old hat in 2000. Moreover, in a plot twist so awful that Hollywood inexplicably can’t keep ripping it off, we find out that the unknown stepbrother of Sidney Prescott is both the new killer and the behind-the-scenes instigator of Billy and Stu’s initial crime spree. Sidney is “the special” and this previously nonexistent sibling is the author of all her pain. It was the kind of dumb over-the-top motive that I expected from Scream, which is why its “Occam’s Razor” reveal was so jolting. It’s well made and polished, but the story it tells, and the lack of genuine tension makes it the worst Scream of the bunch.

Much of this film plays like Kevin Williamson’s pitch for Scream 3 before real life went and trumped fiction, which is part of why the film doesn’t really feel like a “made in 2011” Scream film. Aside from a couple references to “torture porn” and some newfangled technology, Wes Craven and Kevin Williamson’s Scream 4 feels like it could have been made in 1998. We get a new group of film-crazy teens (Hayden Panettiere is the arguable standout) and a new killing spree starting up in Woodsboro right as Sidney returns home for a book tour. The film’s Russian Dolls prologue is clever if entirely lacking in tension, and the big reveal/evil monologue is some of the best stuff in the franchise. Alas, getting from the prologue to the finale is a mind-numbing chore.

Gale (Courtney Cox, at least looking ridiculously Masters of the Universe-level hot after Scream 3’s infamous hairdo) infiltrates a film club which yields no actual information and everyone else waiting around for the killers to reveal themselves. The film’s obsession with the first Scream undercuts its value as a third sequel, while the picture eventually becomes a feature-length screed arguing for its own artistic irrelevance and willful mediocrity. And while the actual climax features career highlight reel-stuff from Emma Roberts, including an of-the-moment motive, Scream 4 undercuts its own pitch-black resolution with a needless “happy ending” epilogue. While fortunately much more violent and gruesome than Scream 3, the film, admittedly an ahead-of-its-time legacy sequel. can’t help but play less as its own thing and more as a monument to Scream’s initial brilliance.

Written by James Vanderbilt and Guy Busick, with the duo behind Ready or Not (Matt Bettinelli-Olpin and Tyler Gillett) taking over for the late Wes Craven in the director’s chair, Scream essentially plays like a loose remake of Scream 4 that tries its best not to turn itself into a jogging-in-place waiting game. This time out, the artistic redundancy and theoretical irrelevance is baked into the text, which still means we get a lot of regurgitation. No spoilers, but the film hits a bullseye in terms of cultural commentary and modern Hollywood franchise-building, specifically legacy sequels, toxic fandom and how too few franchise revamps use the entire continuity at their disposal. In terms of what it’s about and even how it’s about it (kinda-sorta New Nightmare), Scream will make an excellent self-loathing double-feature with The Matrix Resurrections.

Scream one-ups that one (and the likes of Terminator: Dark Fate and Independence Day Resurgence) in not letting the legacy characters take over the movie. Yes, Sheriff Dewey (David Arquette) plays the Han Solo-in-Force Awakens role while Campbell and Cox put in their time. The spotlight mostly remains on the newbies. Sam (Melissa Barrara) must return home after her sister (Jenna Ortega) is attacked, while also confronting a dark secret that A) is blessedly revealed quickly and B) isn’t intended to be a defining character attribute. The brutal, violent slasher is shot too tightly (perhaps to hide its lower budget or to better be viewed on a phone in 60 days) but still justifies a big-screen experience and is more beat-by-beat entertaining and of-the-moment relevant than the earlier two Scream sequels. It’s just a three-star big-screen horror movie.

Wes Craven and Kevin Williamson’s original leggy Christmas blockbuster still holds up. The infamous prologue, featuring teen boys emotionally torturing and eventually murdering an attractive teen girl (Drew Barrymore) just for the hell of it, is as brutal and subtext-made-text incisive now as it was 25 years ago, while remaining, as a horror set piece, the best thing Wes Craven has ever directed. Honestly, I think the rest of the movie has always been merely damn good, with sharp acting (from Campbell and Matthew Lillard especially) and a “shocking because it’s not shocking” finale elevating the middle portions. The kills, save for the prologue, aren’t terribly tragic (oh no, the school principal and the cameraman) but the then-novel notion of slasher victims who are aware of slasher movies makes it sing.

It also helps that the film buff-ery is confined to a few key characters (notable Jamie Kennedy’s Randy) as opposed to later sequels where everyone’s a self-aware film nerd. And the first Scream is plays fresh enough that viewers weren’t going to constantly try to deduce who the killer might be, since there was no guarantee that it was a closed-room mystery. Nonetheless, what was shocking at the time (the notion of two killers, the “your mother broke up my family” motive, the copious shootings, the human and fallible masked murderer, etc.) still works in its favor, and the first Scream makes damn sure to work for those who spent their childhoods watching Halloween and A Nightmare on Elm Street and those for whom Scream was their gateway drug.

Amazingly produced and released in less than a year after its surprise-smash predecessor, Scream 2 is partially about the redundancy of sequels while being one of the best horror movie sequels this side of The Silence of the Lambs. The film has all the confidence of being the follow-up to a much-loved original, offering a huge scale (it feels like the most “epic” slasher movie ever made, then and now), a big ensemble cast full of sympathetic would-be victims and villains and time for two (02) musical numbers, including a gothic stage-bound horror sequence scored by Danny Elfman just because they could. Campbell is terrific as the unwilling star of a college-set murder spree, clearly dealing with PTSD and struggling to have a normal college experience. Unlike the first film, the killings are scary, gruesome and occasionally tragic.

The shocking mid-film demise of the audience surrogate character (RIP Randy Meeks) still stands as the series’ boldest move, with the brief argument between Sidney and Dewey over who must call Randy’s mother standing as the most heartbreaking moment in the franchise. The movie premiere prologue works as audience-implicated meta-commentary, while an attempt to escape a crashed car stands as the series’ most suspenseful set piece. The “whodunnit” aspects are a little too clever and self-aware this time, but Campbell’s superb performance helps make this an ahead-of-its-time look at “the final girl” as “empowered survivor,” which is a huge reason the Scream series still endures. Bigger, bolder and better than the first, Scream 2 may be the best pure slasher movie ever made and (give or take New Nightmare) Wes Craven’s definitive directorial achievement.