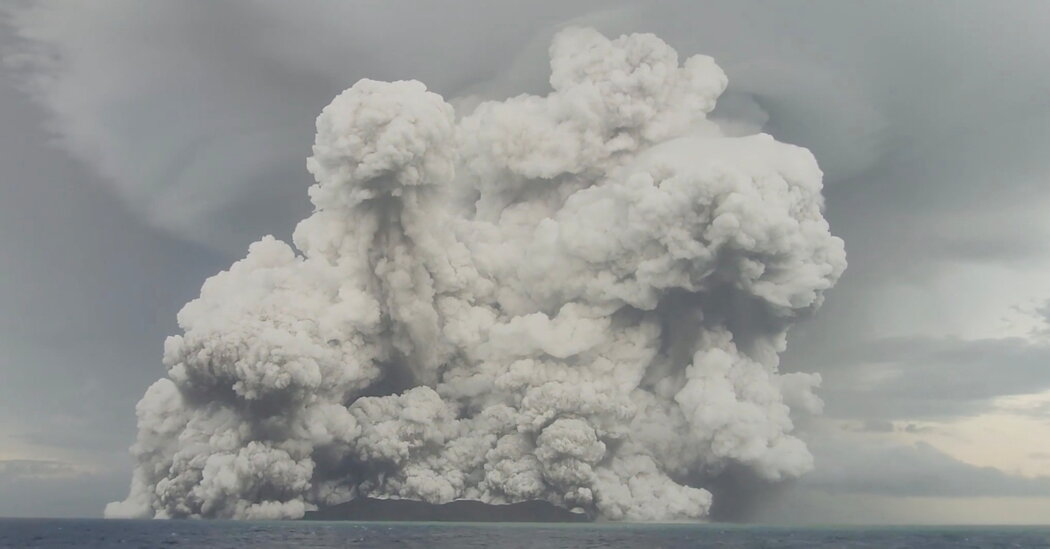 Two days after a colossal volcanic eruption spawned a tsunami that struck the island nation of Tonga, severed communication lines left Tongans around the world waiting anxiously for news of their loved ones, while aid agencies and the country’s Pacific neighbors struggled to assess the scale of the damage.

On Saturday night, an undersea volcano about 40 miles north of Tonga’s main island belched ash, gas and steam more than 12 miles into the air, creating a cloud of sulfur dioxide over the region, sending particles drifting across the island and disabling a crucial submarine internet cable. It was believed to be the largest volcanic eruption in three decades, with the shock wave traveling thousands of miles.

Hours later, Tonga, a country of around 100,000 people, was pummeled by a tsunami. Waves of up to four feet hit Nuku’alofa, the Tongan capital. Footage shared in the final moments before the internet connection was cut showed people running inland, searching desperately for higher ground in a very flat country.

The volcano, Hunga Tonga-Hunga Ha’apai, erupted again on Monday but did not trigger a tsunami warning. Tonga sits along the Pacific “Ring of Fire,” a series of fault lines where earthquakes and volcanic activity are frequent.

Fatafehi Fakafanua, the speaker of the Legislative Assembly of Tonga, was able to send out a message on social media on Monday, describing the tsunami’s impact as “devastating” and noting that the fall of volcanic ash had affected many areas of the country.

“The full extent of the harm to lives and property is currently unknown,” he said. “What we do know is that Tonga needs immediate assistance to provide its citizens with fresh drinking water and food.”

The loss of most communications, as well as a lingering ash cloud that had reached some 63,000 feet high, have made it difficult for the outside world to get a picture of the situation in Tonga.

Both Australia and New Zealand sent surveillance flights to the country on Monday. The United Nations said its agencies were standing by to send emergency supplies to Tonga but were awaiting information about what was needed.

“We don’t have a clear picture,” Stéphane Dujarric, a U.N. spokesman, told reporters in New York. “I don’t think anyone has a clear picture. And that’s what everybody, I think, is, first of all, scrambling to get exactly: the clarity of information so we can dispatch the right kind of aid.”

Mr. Dujarric said that the United Nations had 23 staff members in Tonga — all but one of them Tongans — and that “all were accounted for,” correcting an earlier statement that no U.N. workers were in the country. The organization’s offices for the region are in Fiji, which is about 500 miles to the northwest.

Based on information gathered by the Australian surveillance flight, the U.N. Office for the Coordination of Humanitarian Affairs reported significant infrastructure damage on Tongatapu, the main island, particularly to property in the western beaches region.

There was “particular concern” about two small low-lying islands from which there had been no contact and on which just more than 100 people live. “An active distress beacon had been detected from Mango,” the report said, referring to one of the islands.

The information vacuum left thousands of overseas Tongans to make do with piecemeal videos — of waves buffeting the shore, or of families sheltering under tables below a dark sky — that were shared through the island’s few satellite links.

The organizations with access to these communications, including the New Zealand High Commission, have filled in some of the blanks, though many people were still waiting desperately for news.

Siniva Valu Filise, who lives in Wales, where her husband played professional rugby, is worried about her parents, 73 and 66, whose home is on the western side of Tonga.

A friend with a connection to the Tongan military was able to briefly confirm in a message that her parents were safe, she said. But she is unsure about their access to clean drinking water and food after the eruption left the layer of ash across the country.

“We feel so helpless,” she said. “Just watching from afar, we can’t even do anything.”

She added: “It’s been two days now. It’s just so hard, trying to hold on to that glimmer of hope.”

Two people have been reported missing, according to the United Nations, and at least one person died in the tsunami. Angela Glover, a British woman who had lived in Tonga for about five years, was swept away while trying to save her dogs, according to video footage. Her husband, James, survived by holding on to a tree.

On Monday, the day before Ms. Glover’s body was found, Fatima Dowling, a friend of the couple’s who lives in New South Wales in Australia, said it was becoming harder to remain optimistic. “It’s sort of — the longer it drags on,” she said, her voice trailing off. “It’s not a very big island. If she hasn’t been found yet. …”

Ms. Dowling, who had volunteered with Ms. Glover in Tonga, was also waiting for news from a different friend who runs a resort, with whom she normally speaks daily. “I pretty much ring her every hour or so, but nothing’s happening,” she said. “It’s just impossible at the moment.”

Tongans overseas have organized prayer circles and vigils to support one another as they await word.

“I’ve just been talking to friends, organizing prayer vigils and stuff like that for family and for Tongans overseas who are trying to make connections with family back home,” said Mele Makelesi Facci, who lives in Melbourne, Australia, and has not heard from her relatives in Tonga, including a niece who had a baby a few weeks ago.

For Tongan seasonal workers living in Australia, such community and prayer were helping to bridge the gap, she added.

“They feel helpless. They can’t do anything from here,” she said. “Just not being able to be connected, I think it’s the hardest part.”