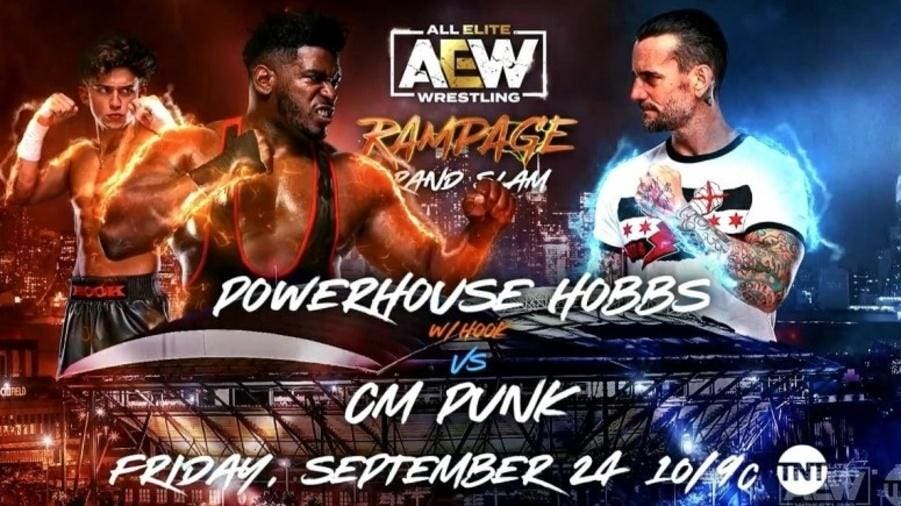 The following matches were taped for Rampage:

Last week’s broadcast of AEW Rampage once again drew its lowest viewership to date with 642,000 viewers.

CM Punk got two quad tattoos since we last saw him and I’m pretty sure one of them was Princess Leia.

AEW has something in Hook. After CM Punk flipped him off, fans promptly began chanting “Hook!”

CM Punk got no air on a flailing elbow drop that somehow managed to get worse than it was before he left.

Punk was bleeding toward the end of this match, and an errant top-rope hurricanrana may have had something to do with it.

This was a very solid match and I’m actually looking forward to CM Punk vs. Hook should it ever happen.

In one of the best triple team moves you’ll see, The Young Bucks ran the ropes five times and kissed Adam Cole on the cheek while he had Jungle Boy in a Camel Clutch. Then they did standing backflips followed by a double dropkick.

Adam Cole looked right at home getting sprayed down by Brandon Cutler.

After Christian Cage was tossed off the ramp, Don Callis hilariously remarked “The train to Stamford leaves in 20 minutes, don’t miss it!”

Jungle Boy and Adam Cole stared each other down after this match, and while I feel like Adam Cole has to be considered the favorite in that match, I could see it going either way.

Men of the Year def. The Inner Circle

The Men of the Year got the saddest-looking pyro for this match.

Paige VanZant looked way to happy to be in AEW–even blowing kisses—compared to the other menacing goons on American Top Team.

Lucha Brothers, Santana and Ortiz def. Private Party, The Butcher and The Blade

Early on in the match, all four members of the babyface team hit a simultaneous dive.

Whenever The Lucha Brothers and Santana and Ortiz are ready to mix it up, that match be a doozy.

The only thing better than Miro destroying two babyfaces was heels Ricky Starks and Taz celebrating it.

Fuego del Sol has made quite the living bumping for Miro. I don’t think anybody does it better.

I was surprised at Anna Jay winning this match, albeit with brass knuckles, however the big story coming out of this match was The Dark Order temporarily reuniting only for Stu Grayson and Evil Uno to walk out. Does this lead to Bray Wyatt making his triumphant debut in Rochester next week.

The pre-interview segment for this match was the best yet, and it was all because of Eddie Kingston.

I’m so glad they cut down Minoru Suzuki’s music because it took forever to get to “Kaze Ni Nare,” but it had to feel good for Suzuki to hear 20,000 fans chanting it.

Suzuki passed a chair to Jon Moxley and challenged him to a duel like a savage.

Lance Archer took a break to attack a group of AEW young boys before chokeslamming Jon Moxley on all of them.

It was great to see Homicide and this New York crowd gave him a hero’s welcome.