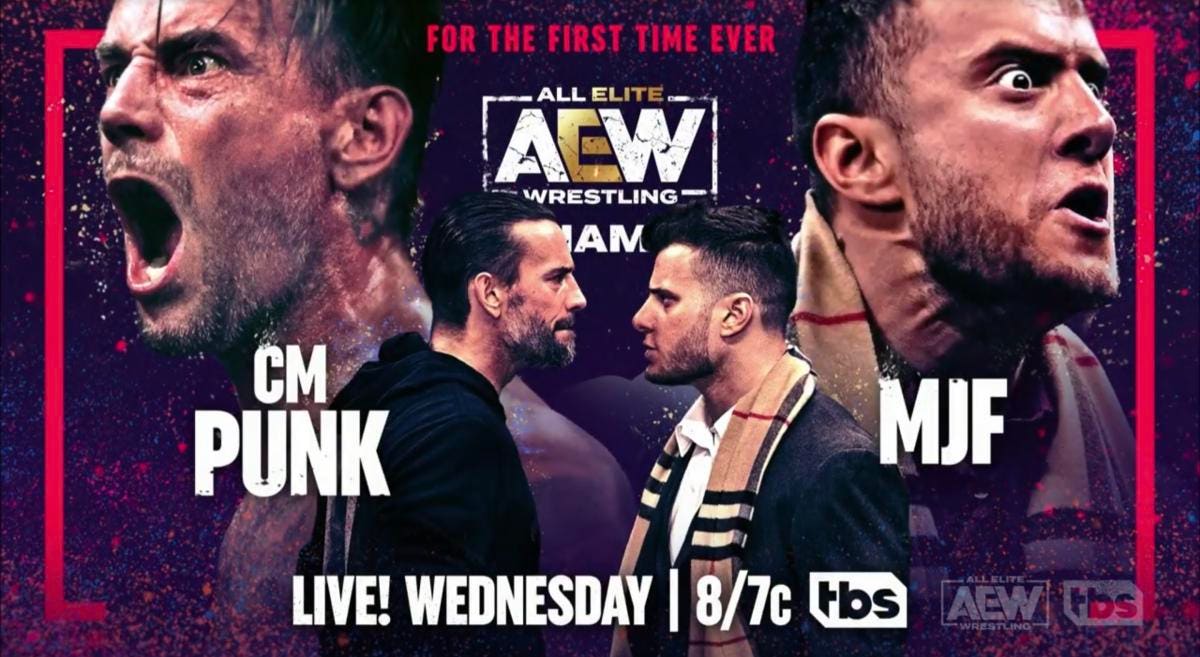 AEW Dynamite advertised MJF vs. CM Punk, Malakai Black and Brody King vs. PAC and Penta El Zero Miero, Nyla Rose vs. Ruby Soho, Ricky Starks vs. Jay Lethal and Jon Moxley vs. the newly released Brian Kendrick. Though Moxley was advertised to face Kendrick, the former NXT trainer was pulled from Dynamite amid backlash from past insensitive remarks.

“We’ve been made aware of abhorrent & offensive comments made in the past by Brian Kendrick,” said AEW President Tony Khan.

“There’s no room in AEW for the views expressed by Brian. We think it’s best for all that Brian be pulled from tonight’s card as we gather more info. We’ll announce a replacement bout ASAP.”

Kendrick was replaced by Wheeler Yuta.

Last week’s broadcast of AEW Dynamite garnered 1.100 million viewers. Bolstered by a sizable lead-in from The Big Bang Theory, Dynamite surpassed one million viewers in three of its first four weeks on TBS.

Danhausen is now a member of the Best Friend’s stable, and based on tonight’s reaction, he’s currently its most popular member.

There were dueling chants of “Let’s go Moxley!” and “Danhausen.” The Danhausen chants won out.

Last time Wheeler Yuta faced Moxley, he was squashed immediately. This time around, they messed around and had a damn-good opener.

The biggest pop of this match came when—you guessed it—Danhausen placed a curse on Moxley.

Bryan Danielson cut a great babyface promo about why he and Moxley should be teaming up together. Then he promptly turned heel by referencing a “Millennial Cowboy,” a “Dinosaur” and a “vlogger.”

Danielson’s heel promo was even better as he tried to entice Moxley to help train the future of wrestling. Danielson essentially pitched himself and Moxley mentoring Lee Moriarty, Wheeler Yuta and Daniel Garcia. This hardcore crowd ate the idea right up.

Brandi Rhodes seemed to tamper with IMPACT’s Josh Alexander by telling Ethan Page the only reason AEW signed him was to get to Alexander.

This crowd sided with Dan Lambert, and was all over Brandi Rhodes, chanting “shut the [expletive] up!” Between Brandi Rhodes and Cody Rhodes, it’s hard to decipher who gets booed louder.

This segment ended with a brawl between Brandi Rhodes and Paige Van Zant.

King of the Black Throne vs. Death Triangle

Malakai’s new theme music for King of the Black Throne is far inferior to his original music.

During his entrance, PAC was selling that he had lost his eyesight, and needed Alex Abrahantes to accompany him to the ring. PAC promptly removed the blindfold after an opening exchange.

Brody King might be one of the three biggest men in AEW.

Penta was the latest wrestler to get misted. Given how well PAC recovered, Penta should be fine.

During their last match, Ruby Soho infamously had trouble removing her jacket. This time around, she had Lars Frederiksen from Rancid help remove her jacket prior to the match. Then Ruby threw her jacket at Nyla Rose to start the match.

The finish to the match looked like a botch by Ruby Soho, but she was supposed to miss the kick, so it was just good acting. Rose went over with some help from Vickie Guerrero in one of her better matches.

This segment meant more promo time for Lambert, who was booed this time, and even a few words from Jake “The Snake” Roberts.

Lance Archer was made to look like a monster by delivering a Blackout through a table, but still few people are buying Archer as a threat to become the new AeW world champion.

These two received plenty of time, which began at around 6:20 p.m. PST.

A fan was taking a selfie video of MJF and CM Punk brawling. A frustrated Jim Ross referred to the fan as “a goofy guy.”

MJF appeared to win this match after using his wrist tape to choke out MJF, but the match was promptly restarted. This was similar to MJF’s false win against Chris Jericho at AEW All Out.

Unless it may have been a fan, Kip Sabian appeared to be in the front row under his new gimmick. He received a dubious amount of TV time.

The crowd seemed to be taken down a peg after the false finish. Save for a few spots, they never returned to how heated they were during first half of the match. At one point, fans started chanting “deep dish pizza” to entertain themselves.

MJF beat CM Punk a second time with help from the Dynamite Diamond ring and Wardlow (who passed the ring to MJF). A very surprising finish.