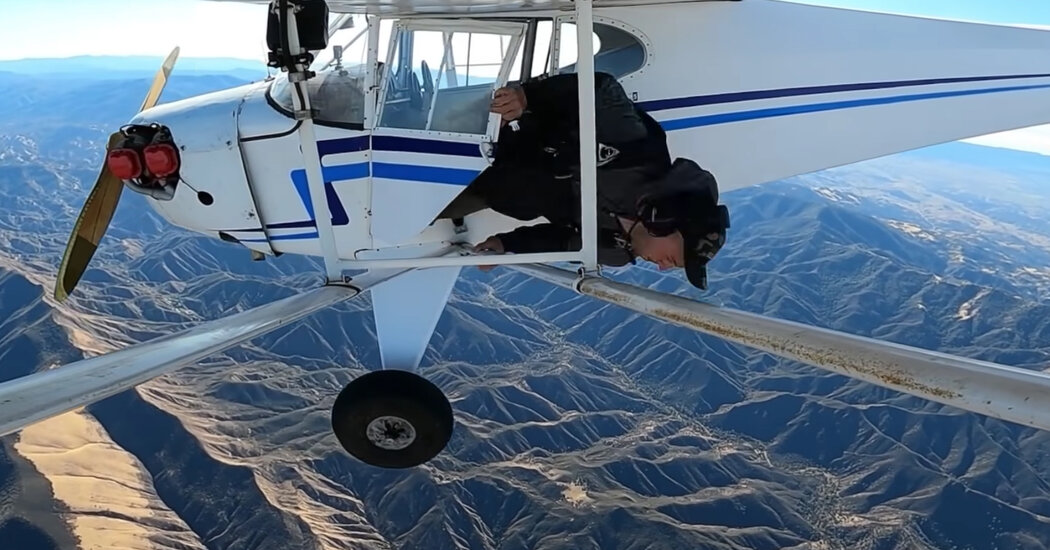 The YouTube video with the attention-grabbing title “I Crashed My Plane” begins with Trevor Jacob piloting a small aircraft with several cameras attached, showing off sweeping views of sepia and green above the Los Padres National Forest in Southern California.

Then the propeller stops spinning. Mr. Jacob unleashes a flurry of expletives, opens the door and jumps out with a parachute, abandoning the plane as he descends toward the forest, a selfie stick in hand to record it all.

“I’m just so happy to be alive,” he says after landing in prickly brush, documenting his hike through the forest, which, he says in the video, lasted at least six hours until a farmer found him at dusk. Earlier, he had found the wrecked, mangled plane in a thicket of dried shrubs.

Almost immediately, however, viewers and aviation experts expressed doubts online over his portrayal of the Nov. 24 crash. It was orchestrated, they claimed, for views and likes, and several steps Mr. Jacob took, such as wearing a parachute in the first place, were evidence of a preconceived publicity stunt.

Mr. Jacob turned off comments for the nearly 13-minute video, which was uploaded to his channel in December and has more than a million views. But the uproar grew louder.

The Federal Aviation Administration and the National Transportation Safety Board are investigating the crash and its cause, which is routine for both agencies after a plane crash. The agencies declined to comment further on their investigations.

Mr. Jacob, a former snowboarding Olympian turned YouTuber with more than 100,000 subscribers, said in a statement on Saturday that “I’ll happily say I did not purposely crash my plane for views on YouTube.”

“Given my background I could see why people would think that,” said Mr. Jacob, who is known for daredevil adventures such as skydiving and snowboarding in Iceland. “I’ve been filming everything I do since I was 5 years old. Documenting this trip was no different than any other day for me.”

He added that he had flown that day to spread the ashes of his best friend, Johnny Strange, over the top of a Sierra Nevada mountain. Mr. Strange died in 2015 while BASE jumping, an extreme sport in which people parachute from a fixed structure, such as a cliff.

“People can believe whatever they choose,” Mr. Jacob said. “They have the freedom to do just that.”

Mr. Jacob’s denial that the crash was deliberate continues to unsettle some pilots and aviation enthusiasts, who have posted rebuttal videos over the last month, detailing how they believe Mr. Jacob staged the crash and, in the process, cheapened their hobby.

“I looked at the video and thought, ‘This is sort of stupid. Why did he do that?’” Robert Perry, a flight instructor who has flown over the Los Padres National Forest and surrounding areas for nearly four decades, said on Saturday. “There were so many things that made me know that this was sort of a put-on.”

One misgiving, he said, was that “you don’t fly a little airplane with a parachute.”

A pilot in such a small plane, like the Taylorcraft model that Mr. Jacob was flying, has very little room to maneuver, and to fit in the seat with a skydiving parachute, he would have had to remove the seat cushions, Mr. Perry said. It was unclear if Mr. Jacob did so.

In the video, referring to his safe landing, Mr. Jacob says that was why he always flies with a parachute.

But in earlier videos, including a 22-minute one titled “Scary Flying Stories,” he could not be seen with a parachute while flying. He does, however, mention that he wore a parachute once on a helicopter in case anything went wrong.

Another discrepancy is that many small airplanes, such as Mr. Jacob’s, can be landed safely from a high altitude when they malfunction. They can glide to a landing at about 40 miles an hour, with pilots often suffering only minor injuries, Mr. Perry said.

“He could have landed even though he was over mountainous terrain,” Mr. Perry said. “He was at a high enough altitude from the video that he could’ve glided 15 miles into some meadow somewhere, or road, and put it down normally.”

Timothy Loranger, an aviation lawyer based in Los Angeles, said on Saturday that the video was “all very convenient” and questionable.

The propeller stopping? That would happen only if Mr. Jacob pulled back the control and slowed the aircraft, creating a “dramatic effect,” Mr. Loranger said. That there was no visible attempt to restart the engine and that Mr. Jacob is not heard calling air-traffic control? Those were the actions of someone seemingly not in actual danger, he said.

“He didn’t do any of those things that I think even a basically trained new pilot would do,” Mr. Loranger said.

After the National Transportation Safety Board finds a cause for the crash, Mr. Loranger said, the F.A.A. will likely try to determine “whether the pilot acted appropriately or did something that violated the regulation.”

“No reasonable person flies an airplane with the intention of jumping out of it and allowing the aircraft to just fly off in the distance,” he said. “It just goes against everything that a pilot stands for. Safety is absolutely paramount.”