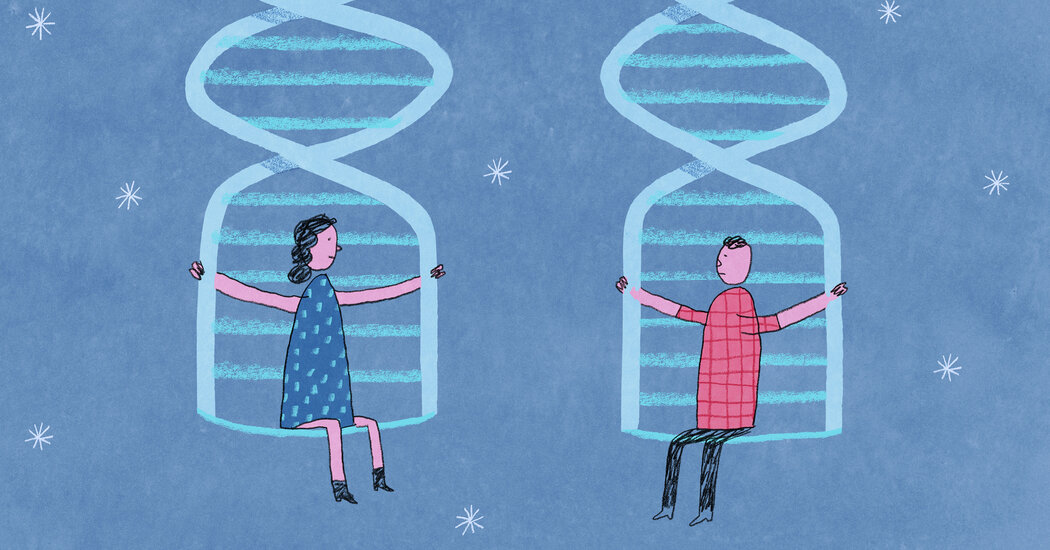 When BB visited and the waitress at lunch asked if we were siblings, my heart fluttered.

The double helix diagram is a color-coded spiral ladder with chemical-base rungs. Every day, I climbed it and swung around, exploring, gobsmacked. Chromosomes are the tiniest, hugest things in the world. If you believe the nurture theory, they’re unimportant (as plenty of smart people who love me proclaimed confidently:“It’s just sperm!”). But if you believe the nature theory, they’re the end-all be-all.

I think it’s both, though I had fallen deep into my own chromo-zone. Finally, I was no longer alone; my new brother was there.

Right away, BB wanted to find our donor, whom we referred to as “Our Guy.” After 10 weeks of genetic sleuthing through a line of second cousins on 23andMe, BB reached our holy grail. Our Guy was alive, a retired obstetrician in Nashville. He was 79 and looked good. He had a name, Frank. He had a face; it was kind. It also looked a lot like ours. His name might as well have been “Gene.”

Frank was married with two grown sons and a daughter. On Facebook, we stared at them too.

We decided to write Frank a joint letter, but my heart sank as our first conflict as siblings unfolded in the tracked comments on our drafts. My approach was heartfelt and detailed; BB’s was jaunty and brief. We both wanted the same thing — a response — but held stubbornly to our own strategies. We each feared the other’s style would lead to silence, or, worse, a cease-and-desist letter, which happens. Such a cosmic dismissal would have been intolerable, and I became pre-furious with Our Guy for his possible rejection.

Finally, I told BB to just send his version and not mention me.

“It’s not a bad idea,” he said. “I’ll do the reconnaissance, and if he doesn’t respond, you can’t take it personally.”

But bowing out of the letter left me feeling alone once again, guilty for abandoning our joint effort, and also terrified that BB would now disappear. “This whole thing falls apart without him,” I said, sobbing, on my therapist’s couch.