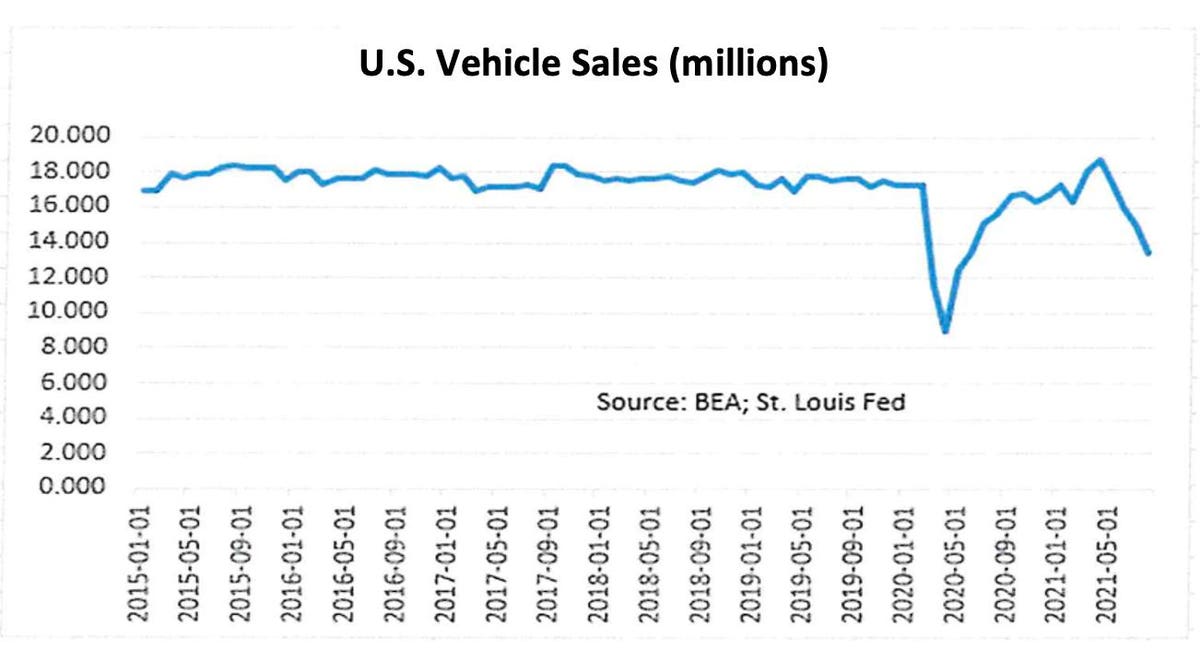 While the story of the week was the big “miss” in Nonfarm Payrolls, most of the incoming data continue to be much softer than the markets or financial media let on, as they continue to ignore the implications. The chart above shows U.S. vehicle sales beginning in 2015.  Note the steady sales levels until the pandemic, the climb out to just above normal, and now a renewed falloff.  Sales in August were -11% lower than in July, as they fell to a 13.5 million annual rate. They were nearly 19 million in April. Could it possibly be that the helicopter money pulled demand forward? Lack of semi-conductors, you say! If so, why are used car sales also falling?

Now, look at the chart of the NY Fed’s Weekly Economic Index. Like autos, note the big rise in April and the tail-off since. From this chart, it appears that the “growth” all occurred in April, causing Q2’s GDP to rise 6.6%. But this index has been falling since, implying that “growth” has slowed since then, leading us to conclude that Q3’s growth will be weaker than Q2’s, and Q4’s worse yet.

In past blogs, we discussed the potential impact of the Delta-variant. The impacts from it are continuing. Restaurant reservations are falling, hotels are experiencing cancellations and a lower number of room nights, and a significant number of major corporations have delayed a return to the office. The latest employment data show job losses in the retail, hospitality, and restaurant sectors.

Here is a partial list of weakening incoming data:

The Payroll Survey: Friday’s Nonfarm Payrolls at +235K (Seasonally Adjusted (SA)) also disappointed the consensus view (+733K), yet another big miss on the part of the business forecasters. There wasn’t much impact on the equity markets (September 3: DOW: -74.7, S&P 500: -1.5; Nasdaq : +32.3). The Not Seasonally Adjusted (NSA) number was +312K. Our view has been, and continues to be, that the pandemic and its nuances (Delta-variant) aren’t seasonally adjustable. From a strictly statistical point of view, the pandemic data haven’t been around long enough to display seasonality and using seasonal factors from pre-pandemic data makes no sense because today’s data is profoundly influenced by the pandemic (i.e., re-opening, mask mandates, supply-chain issues, government supplemental payments, school re-opening issues …). Nevertheless, the August +312K NSA number appears close enough to the +235K SA one – so what’s the issue for us?

The people with jobs are the ones that get paid. Over the last two months, BLS has told us that 1.288 million (SA) jobs were created (1.053 million in July (revised) and 235K in August). The NSA numbers (these are the actual job counts) for both months combined was 278K (312K for August and -34K for July). 278K new payrolls is a far cry from 1.288 million. Perhaps this is why the August business surveys show employment softness! Noteworthy: the NSA data shows -64K in the retail sector, -74K in leisure/hospitality, -50K in accommodation (hotels) and -52K in restaurants. This data strongly implies that the Delta-variant has had a dramatic economic impact. We think this impact will continue at least for another few months.

Weekly Initial Claims (ICs): The weekly data are both encouraging and discouraging. Encouraging because ICs in the state programs fell from 299K to 288k (NSA) the week of August 28. ICs represent new layoffs, and they continue to inch their way toward the 200K/week level that was the pre-pandemic “normal.”

But it is discouraging to realize that there will be a negative economic impact in early September when millions of unemployed lose those benefits. Small business owners are payors into the state systems for their employees, but the owners, themselves, are not eligible for state unemployment benefits (only their employees). The Pandemic Unemployment Assistance (PUA) programs were established early in the pandemic for these business owners. As you can see from the PUA Initial Claims chart (data from April through August), the PUA programs have struggled of late (Delta-variant?) and the weekly new claims have remained above 100K.

The PUA programs end the first week of September, so their demise is imminent.

Continuing Claims (CCs): While the 100K/week ICs are worrisome, the real issue is the imminent cessation of benefits for the 9.2 million Continuous Claimants (those getting benefits for more than one week) in the PUA programs.

If such recipients have only been receiving benefits of $500/week, they are facing a reduction of $45 billion/month in household income (that’s about 3% of such income). Expect a significant impact on consumption at least for the remainder of the year.

Opt-Outs vs. Opt-Ins: The tables below continue to show that the Opt-Out states (those not paying the federal $300/week supplement) have continued to outpace the Opt-Ins as far as reducing the unemployment rolls. From May 15 through August 21, Opt-Out state unemployment has fallen by more than 41% vs. under 20% for the Op-Ins.

Looking more granularly (table below), using the final data for August 14, Opt-Outs (representing 25% of the total CCs) reduced unemployment by -40K, while unemployment increased in the Opt-In states by +42K!

The preliminary data for August 21 show somewhat better performance of the Opt-Ins, as their CC count decreased only slightly more slowly than the Opt-Outs. As we have said in past blogs, we think the Opt-Ins will “catch-up” when the PUA programs end. And, once again, it is our belief that once those programs end, there will be a rush to find employment.

However, filling available job slots isn’t an instantaneous process. There is an appointment needed, then an interview, a background check, and finally, an offer and acceptance. So, even if the majority of the 9.2 million CCs begin to look for work, it may take several months for a semblance of “normality” to return. And the economic implication is that there is likely to be a noticeable consumption slowdown, with retail falling at an even faster pace than we are seeing in the current emerging data.

Markets continue to ignore the signs of economic slowdown, as does the financial media. Of course, the equity markets love easy money, and slower economic growth means the Fed will stay easy longer. The bond market, on the other hand, appears to see the softness, and rates have reacted to the downside after some “inflation” indigestion last quarter.

Besides the existing softening signs, the rapidly approaching end of the special unemployment programs means no weekly checks for more than nine million current recipients. That is bound to have a negative impact on consumption, implying continued economic weakness in Q4.

(Joshua Barone contributed to this blog)