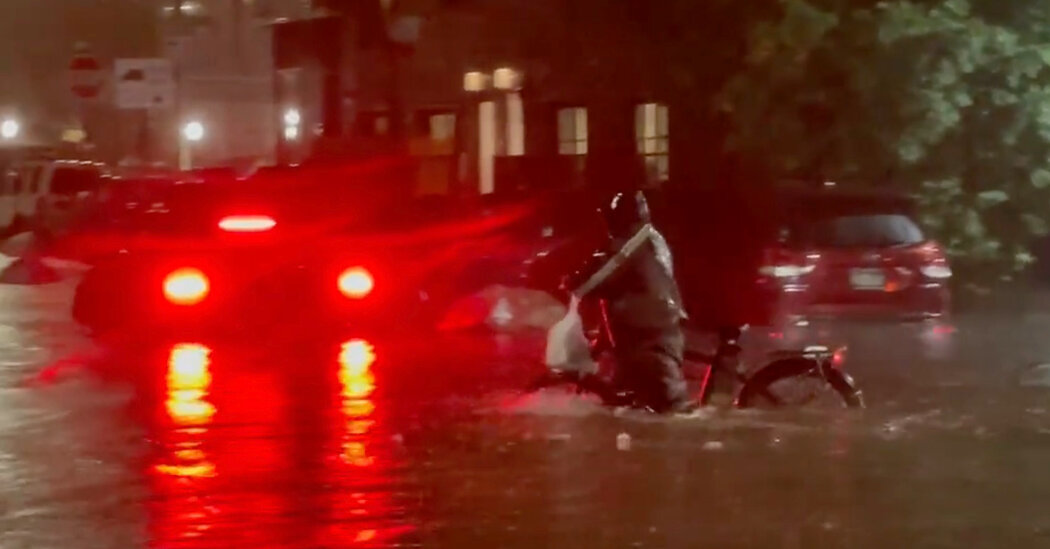 The image struck Johnny Miller right away: a hooded delivery man waded through waist-deep water, clutching someone’s takeout order in a white plastic bag and wheeling his electric bicycle, while all around him people in cars waited for firefighters to rescue them.

Mr. Miller, 40, a freelance photographer, captured the scene on video, as he stood at the intersection of North 11th and Roebling Streets in Williamsburg, Brooklyn, at 10:02 p.m. on Wednesday getting soaked by the ferocious storm. It stood out to him as a vivid example of the city’s economic inequality.

“Seeing this guy push his bicycle past these people in Mercedes to deliver Chinese food just turned my stomach,” Mr. Miller said. “Some of us have the privilege to not work during a disaster and some of us don’t.”

He tweeted the clip from his account Unequal Scenes, which documents poverty and inequality around the globe: “And through it all! @Grubhub delivery still out there bringing your dinner,” he wrote, though he noted that he was unsure if the person worked for Grubhub or a different delivery service.

The clip immediately began to spread, and has since been viewed over six million times.

Others, including Eliza Orlins, a former candidate for Manhattan district attorney, and the sports journalist David Aldridge, echoed that plea. “You can’t have a bowl of cereal for dinner on a night like this??” Mr. Aldridge wrote.

Food delivery companies offer extra money to delivery drivers when demand is high, which can result in dangerous incentives as drivers weigh a particularly lucrative night against risks to their health and safety.

By midday Thursday, more than 10 news organizations had reached out to Mr. Miller offering money to license the clip, he said. He intends to contribute the funds, more than $1,700 so far, to the delivery man in the film — but first he has to determine his identity.

“I really hope I can find him,” Mr. Miller said.