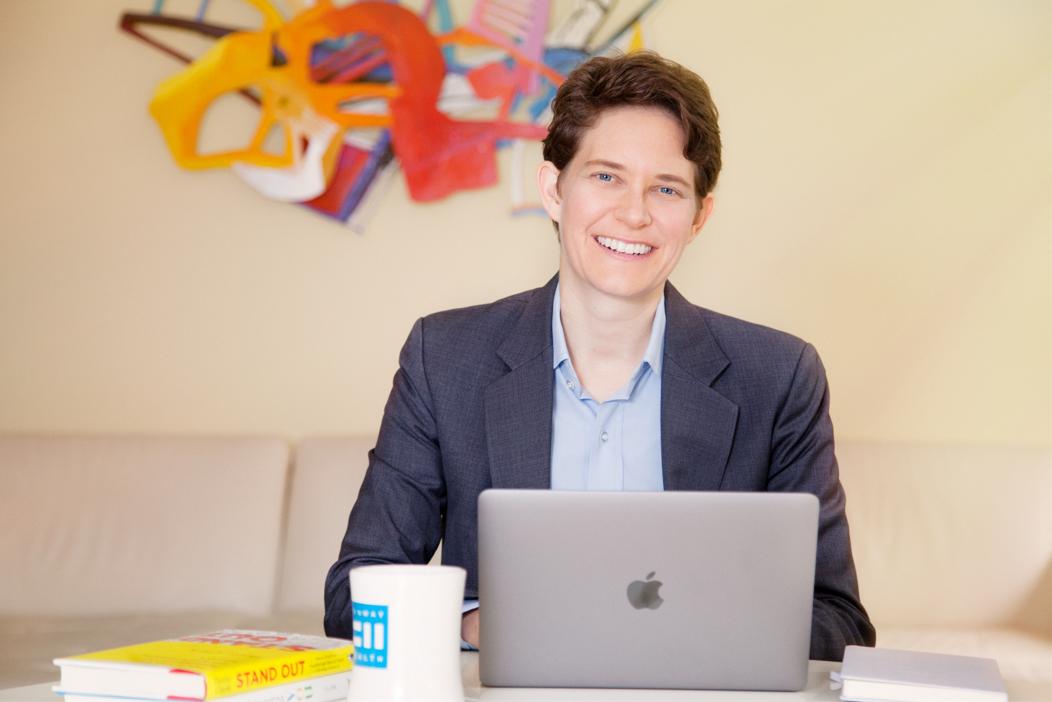 Dorie Clark teaches Executive Education at Duke University’s Fuqua School of Business, is a Top 50 business thinker and a former presidential campaign spokeswoman. Clark has been described by the New York Times as an “expert at self-reinvention and helping others make changes in their lives.” A frequent contributor to the Harvard Business Review, she consults and speaks for clients including Google, Microsoft, and the World Bank.

I had the chance to sit down with Dorie to discuss her new book, The Long Game. It’s been a Wall Street Journal bestseller several months running, and is the best business book I’ve read this year. Dorie and I talked about networking, focus, areas where people tend to get stuck, and what we can expect next from her.

Julia Wuench: One of the things I love so much about your books, and The Long Game is no different, is that you pull incredible examples from real people. You are a collector of the most incredible stories that so poignantly illustrate each point and sub point. (I loved the story of Alisa Cohn taking an improv rap class at Freestyle Love Supreme Academy!) How do you find and match these stories to the overall point you’re making?

Dorie Clark: I started my career as a journalist, and have always loved cataloguing – often just for my own enjoyment – interesting stories about people. Almost everyone has something fascinating about them if you dig deep enough! One thing I’m especially proud of is that over time, as I’ve broadened my network, I’ve been able to include more diverse stories, including from people around the world, to share their experiences.

Wuench: Something that strikes me about your personality is your tasteful chutzpah – that is, your ability to TASTEFULLY go for things, ask for things, and put yourself in the right places where opportunities are easier to come by. A prime example is you writing a letter to the ideas conference Renaissance Weekend and asking for an invite even though it was invite-only. How can others better embody the tasteful chutzpah that you’ve come to practice?

Clark: We have to recognize two things simultaneously – first, “it doesn’t hurt to ask” isn’t quite right. Sometimes, it does hurt to ask – if you ask for inappropriate things and turn people off with an attitude of entitlement. But secondly, it’s also true that we do need to speak up and advocate for ourselves, because many times, people might not even realize we’re interested in an opportunity unless we flag it for them. So I think our approach and our words matter a lot here.

I advocate a “no asks for a year” rule when it comes to new contacts, so they can be sure we’re interested in building a long-term relationship and not just trying to extract sometime from them. And when I do make an ask, I try to be forward about what I’m looking for, but also give people an out so it’s not socially awkward if it’s not feasible. For instance, I might say, “I was curious about X and was hoping you might be able to help. Of course, absolutely understood if that’s not possible, but I figured I’d inquire just in case.” That way, you’re asking – not demanding.

Wuench: How can you tell when it’s time for you to switch from heads up mode (looking for new opportunities) to heads down mode (executing and focusing)?

Clark: Some people – on Tinder as well as in business – are always looking for something better, so they never commit. But in order to make genuine progress, we need to focus on execution at a certain point. Once you have an opportunity in hand that seems very good (even if not perfect) and there’s not a clear reason to believe something better will come your way, it’s good to go ‘heads down’ and start working on it. Six months later, you can re-evaluate – and even if you later decide to change your mind, oftentimes the progress you’ve made will be transferable and will have advanced you in some way.

Wuench: You talk about 4 key career waves to become a recognized expert in your field: learning, creating, connecting and reaping. Where do people most often get stuck and why?

Clark: The key lesson is that we have to keep moving forward: to have lasting career success, we can’t just keep doing the same thing, again and again, like we’re on an assembly line. I’d say the place people are *least* likely to get stuck is in “Creating” mode, because that’s often the most psychologically risky, because many people are hesitant to share their ideas publicly and “put themselves out there.” But there are plenty of people who get stuck in other waves – the Learning wave appeals to perennial students who love to learn but may hesitate to share their own ideas, and the Connecting phase is compelling to extroverts or people who love networking and meeting others. And finally, the siren call of the Reaping phase is tough for almost anyone to resist, because you’re enjoying the fruits of your labor. But the challenge for all of us is to recognize that Reaping is a phase, not a final destination: we have to keep reinventing ourselves and learning new things and moving forward.

Wuench: How do you overcome hedonic adaptation (I’ve also heard it called the hedonistic treadmill) in your own professional life?

Clark: In hedonic adaptation, we very quickly get used to things that at one point we would have thought were amazing – and now, they’re just normal and we don’t celebrate them, which is an attitude that can quickly inure us to the potential joys of life. I think it’s important for us to periodically look back on where we’ve come from and what we’ve accomplished, because if someone had whispered to you five years ago that you’d be doing X and Y and Z right now, in many cases, you’d be excited and thrilled – so it’s doing a favor to your past self by recognizing his or her hard work in getting you to this place.

Wuench: Something so beautiful about your journey as portrayed in this book is that you aren’t afraid to experiment and follow your curiosity. Where will your curiosity take you next?

Clark: I continue to follow my 10 year plan to write a musical that hopefully will make it to Broadway by the 2026 season – and literally this week I have a 10-minute musical that will be presented as part of a showcase at Symphony Space in New York City. Step by step! I’ve also always wanted to publish a mystery novel, so that might be coming soon, too.

You can buy The Long Game here (you’ll be glad you did) and you can learn more about Dorie’s work here.