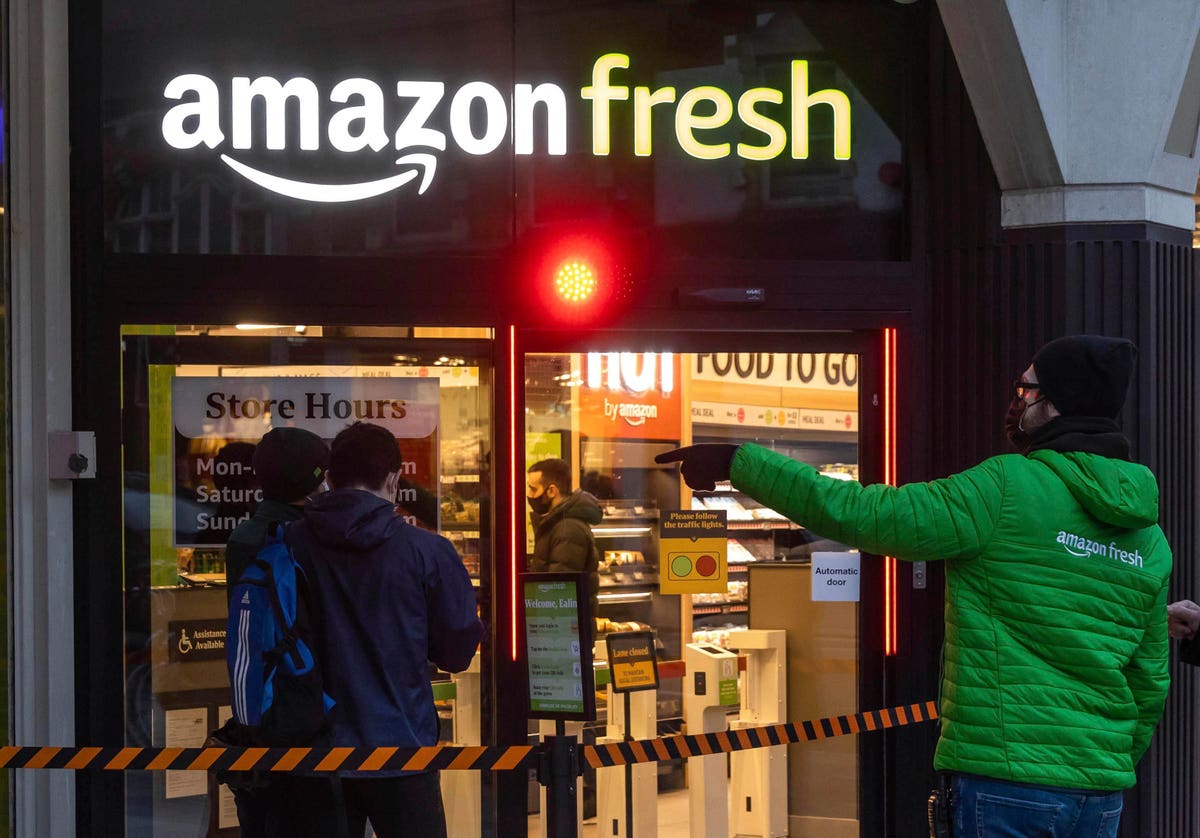 And this article is all about the risks associated with the latter.

Make no mistake — the pandemic arrived in 2020 like a bat out of hell, bringing with it a flurry of in-the-moment and much needed innovation across nearly every industry and especially retail. The pace of technological innovation, as has been stated ad nauseam, likely jumped ahead three to five years in just 2020 alone.

Ideas that were once fun to talk about at parties — things like curbside pickup, Instacart deliveries, and social commerce — suddenly became a de rigueur means of survival for nearly every retailer in some form or fashion.

But, that was also the easy stuff.

While the pace of innovation accelerated under COVID-19, the tea leaves were all there on these innovations before the outbreak began. Smart retailers, like the Amazon s, the Target s, the Walmarts , the Abertsons, and the Best Buys of the world had all been experimenting with many of these very same ideas for the past decade, say nothing of the click-and-collect activity that had already been happening overseas in Europe, too. But, say what one will, it took a pandemic to spur nearly all of them into action, and many retailers, like Macy’s , for example, are still paying the price for being slow to move.

All of which begs the question, going back to Aggarwal’s point above, if these trends were missed by so many, then what trends still lie around the corner 10 years from now that retailers could soon miss again?

What follows is a list of the potential blindspots on the horizon, and, while some of them may seem outlandish and out there, remember it is also human nature to overestimate just how far off they all might actually be.

The arrival of many upstart delivery companies, companies like Buyk, GoPuff, and Gorillas, all promising delivery in 30 minutes or less, is a harbinger of one very important point — namely, that speed of delivery matters.

Amazon owns the majority of U.S. consumer mindshare when it comes to quick, reliable delivery, but even Amazon hasn’t gone so far as say Gorillas, which promises delivery in 10 minutes or less.

And, more importantly, even though Amazon is number one in mindshare, who is number two?

No one, at least not right now anyway.

But this is the territory to which everyone, from Instacart to DoorDash to the companies just mentioned above, is trying to stake a claim.

The approach to the problem is two-fold: 1) build out the hard infrastructure as a retailer to occupy this space (the approach of GoPuff, for example) or 2) Try to claim it by becoming a marketplace that specializes in “get-it-quick” delivery through an assortment of various lightweight crowdsourced or “gig” options (i.e. the approach of DoorDash and Instacart).

The first path is a difficult and much more treacherous way to reach the summit, while the second path is just a stone’s throw away from your garden variety retailers — your Bed Bath and Beyonds, your CVSs, your Sephoras, or even your local Kroger grocery stores — continuing to leverage Instacart or DoorDash for third party delivery, thereby enabling DoorDash or Instacart to reverse engineer their way into the hearts and minds of American consumers (if they haven’t already).

The day is coming when Amazon and “another” will emerge to stand atop the quick delivery mountain. The only question that remains is how quickly will the retailers of yesteryear allow tomorrow to happen, while the hard infrastructure types die trying on the backs of billions of dollars in VC funding.

Because the prize of being the number two option is just that large.

The most glaringly obvious example of something that stands to disrupt retail radically over the next 10 years is Amazon Go , and yet so few retailers have paid the concept the attention that it deserves.

Powered by artificial intelligence computer vision (or AICV, for short), Amazon Go lets consumers walk into a store, take whatever they want off the shelves, and “just walk out” and pay in a manner similar to how one pays for an Uber or a Lyft.

The experience is great. It means no more standing in lines . . . ever.

Amazon debuted its Amazon Go concept in 2018. The first store was approximately 3,000 square feet. Two years later it expanded the concept to around 10,000 square feet, and then in 2021 it opened up a full scale 20,000 square foot plus grocery store experience, called Amazon Fresh .

In that same period of time, none of the big guys — not Target, not Walmart, not Kroger — have even debuted one public facing experiment with the technology. Whether hubris or downright negligence, this lack of acitivty is downright laughable.

Because there will come a day soon (my prediction = 5 years or less) when Amazon figures out the technology across every categoriy of product out there, and when it does, U.S. retail will never be the same again.

When it comes to in-store pricing, most retailers are like Stonehenge.

Week after week, they print hundreds if not thousands of physical signs for various promotions and assign payroll weeks in advance to put these signs on shelves, only to find out minutes later that they have already been obsoleted by aggressive pricing online or, worse, just fallen off the shelves entirely because little Timmy came by and knocked them all off while shopping for groceries with his mother.

If the above Amazon Go diatribe didn’t scare the pants of the grocery industry, this last point sure as hell should.

Amazon Fresh’s “Just Walk Out” technology is cool, but what’s even cooler over the long-term is Amazon’s use of electronic shelf labels within its Amazon Fresh stores because they mean that Amazon never needs to schedule another print job, another hour of labor, or pick another sign up off the floor ever again.

No, instead, Amazon can price the products in its grocery stores in real-time, at all times, from a centralized location, and that means a whole hell of a lot of bad news for the grocery industry on the promotions front.

It means the world will soon see online flash sales meet in-store grocery shopping because ideas like strategic promotions on the 1st and the 15th of the month, right when people get their paychecks, with very little advanced warning, could one day soon become a reality.

And every grocer still putting up physical signs will be powerless to stop it.

This trend is a fun little thought exercise. Ask yourself — what is Costco?

Well, essentially, it is a large bulk warehouse that asks consumers to act like warehouse pickers and last-mile delivery drivers. The only difference between it and an honest to god warehouse is the needless presence, as mentioned above, of a cashier at the end of the experience.

So, imagine, just imagine that instead of consumers doing the picking out of a large warehouse/store, automation took the place of humans and robots picked and packed orders for customers while they shopped online, and then all the customers would have to do is swing their cars through a few drive through lanes designed for pickup, similar to a Taco Bell or a McDonalds .

The seeds of this idea are already upon us, too.

Target this past year announced the creation of what it is calling “sortation centers,” i.e. mini-warehouses nearer to consumers and that also come equipped with drive through lanes for Shipt’s third-party delivery drivers.

Therefore, it isn’t much of a logic leap from the idea of a sortation center to ask: what if customers can just drive up and pickup from these locations as well? Especially, if they are willing to buy in bulk?

In fact, “leap” probably isn’t even the right word. Something like a “baby step” feels far more appropriate. And even that may still be too small of a reference point.

Finally, when one puts his or her hands together on many of the trends just mentioned, one last concept also starts to emerge, and that is the arrival of influencer-based asset-lite physical retailing.

For decades, if not centuries, merchants have ruled the roost at retail companies.

But, now? Who needs them?

The influencer has taken over the role as the authority on what people can and should be buying. Which begs the question — why not buy directly from the influencer?

In the online world, it is easy to see how this emerges. Livestreaming, Instagram shopping, etc. all bring this to life, but in the physical world, creating a direct connection like this between the celebrity influencer and one’s fans has almost always necessitated some type of retail partnership because the capital costs of opening up physical stores is too arduous to undertake on one’s own.

With the arrival of contactless scan-and-go shopping, physical stores will begin to work like a shop on Instagram, only the product is still visible in person but shipped to the consumer to a place of his or her choosing.

It is not unlike the glimpse Amazon gave into this world with its GH Lab experiment with Good Housekeeping back in 2018 at the Mall of America. See video below:

There one took out his or her mobile phone, scanned a barcode to buy anything that he or she liked, and was immediately ported into the Amazon app to coordinate delivery.

This example is important because it breaks down our construct of what and who a retailer is and because it shows that from whom people actually buy is far less important than from whom they think they are buying (i.e. the storefront).

Or, said another way, this is one of the reasons Toys R Us is no longer the authority on toys in America, for that title now belongs to some kid named Ryan who unboxes toys to the tune of $30 million per year on YouTube.

And with just a few properly placed mentors to guide him along the way and the right technology at his back, who is to say Ryan couldn’t build out his very own toy empire, in a similar manner to GH Lab, one new, working capital-light store at a time.

But, then again, no one ever went out of business from being too prepared for the future.