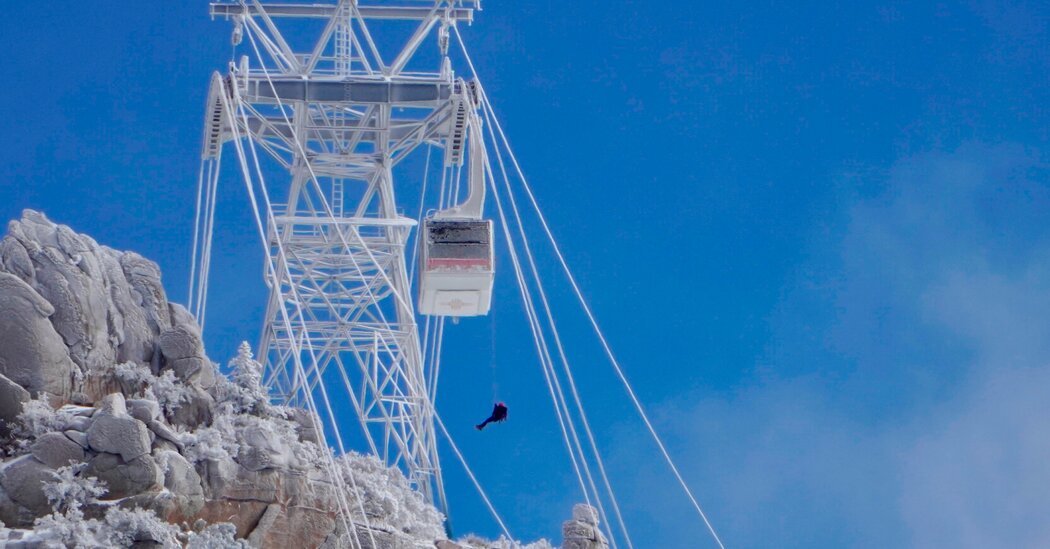 The restaurant workers walked into the aerial tram car at about 9 p.m. on New Year’s Eve, their shifts complete, their moods festive, even with the lashing wind and heavy snow. Amber Santos stood beside the trash bins they had carried inside the car, which reeked of food leftovers from Ten 3, a restaurant at the top of Sandia Peak near Albuquerque.

Almost home, she thought as she felt the tramway system, which shuttles people to the restaurant 10,300 feet above sea level, start to move.

Twenty people were in one car, and one person was in another — 19 employees of Ten 3 and two employees of the tramway system — who were headed home to celebrate 2022.

Then, near the second tower of the tramway, the cars stopped.

It would take more than 12 hours.

As temperatures dipped into the mid-20s, the passengers resorted to rationing Life Savers gummies and six bottles of water as they spent the first few hours of 2022 waiting for rescue crews to arrive.

By Saturday afternoon, all of the stranded passengers had been rescued. No one was injured, officials said.

Spencer Moreland, an incident commander for New Mexico Search and Rescue, which provided about 30 volunteers who helped with the rescue, got a call from the New Mexico State Police at 3 a.m. He was on the scene by 4 a.m., and an hour later, rescuers had begun the more than four-hour hike up the steep terrain in a snowstorm.

Rescuers had to get to a tower, climb to the tram and set up a rope system to lower people to safety, he said. From there, they hiked with the passengers about 100 yards to a landing site where a helicopter whisked them away a few at a time.

Rescuers battled treacherous conditions, said Larry Koren, the pilot who flew the stranded to safety by landing his helicopter on a narrow ridge.

Mr. Koren, who is also the undersheriff for the Bernalillo County Sheriff’s Office, said members of the sheriff’s office, along with other local officials, had trained with the tramway operator for just such a situation.

Such a rescue was one that they had considered but never executed, he said, adding, “And we never expected it would be for 21 people in a snowstorm.”

Michael Donovan, general manager of Sandia Peak Aerial Tramway, said that wind and ice had caused an emergency cable to cross over another cable, preventing the tram cars from reaching their destination.

He said rescuers were lucky that visibility had improved, allowing for a helicopter rescue. Otherwise, the stranded crew members might have had to hike to safety, a trek they were not equipped for.

“Some of the cooks had Crocs on,” he said.

At first, being trapped in a tram car for New Year’s Eve had been welcomed as a funny, yet dangerous, adventure, Ms. Santos said. Her Instagram videos show her and the others yelling “Happy New Year!” at midnight.

But then the temperature began to drop. At 12:57 a.m., it was 35 degrees. The passengers retrieved emergency blankets stored in the car and broke out hard pretzels and Life Savers gummies from their backpacks.

She added, “You just start thinking, ‘Is this how I’m going to die, in a tiny box with my co-workers?’”

The wind swayed the car like a playground swing. At 3:49 a.m., they were bunched together, mostly silent, but still supportive of one another, Ms. Santos said. It was 24 degrees, and she continued to shiver, unable to sleep.

She tried to think positive thoughts: At least the car had a built-in toilet. And at least they could communicate with the tramway system workers through a speaker on the car. The workers told them help was on the way. But by 4 a.m., she believed she was going to die, she said.

“You just felt hopeless,” Ms. Santos said. “You’re cold. You’re sad. You just want to be at home on New Year’s with your friends, doing what other people do.”

When rescue crews finally arrived, she immediately reached for a blanket and a water bottle. After rappelling to the ground, which she said was “actually very exciting,” she got on the helicopter, was checked by medical workers and then walked to her car.

She opened up Instagram one more time and recorded a message.

“I literally have no words for today,” she said. “I’m literally out of words. This has been horrible.”