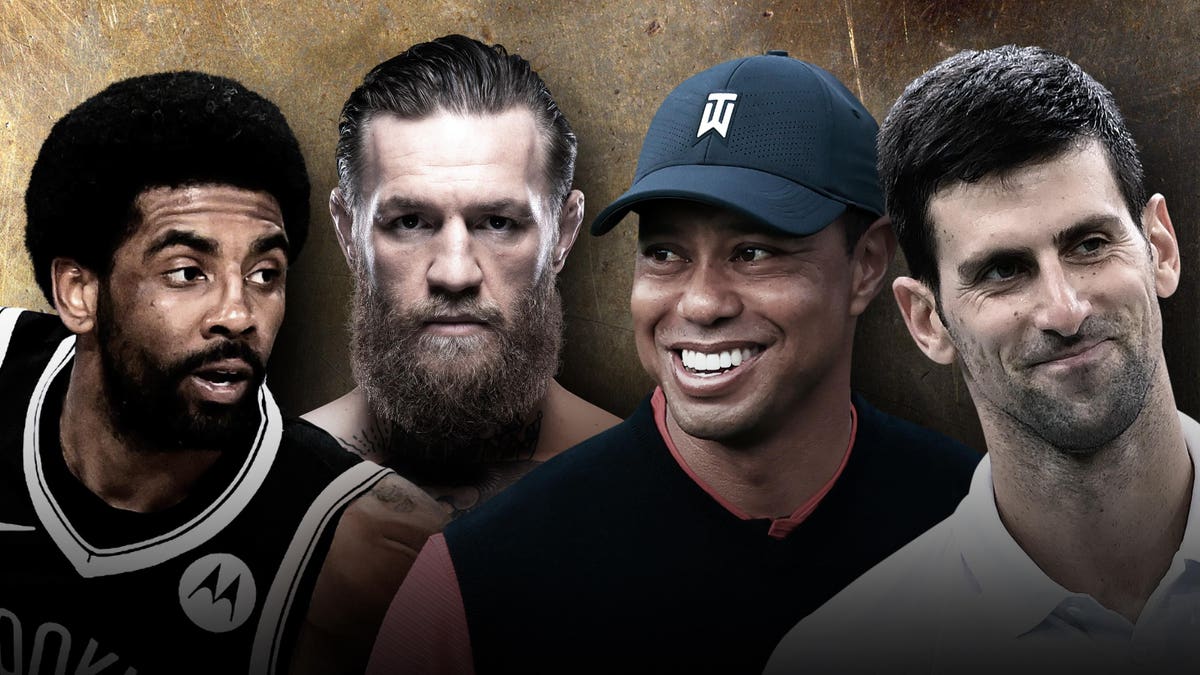 Athletes have largely been open to receiving Covid-19 vaccinations that became widely available in the first half of 2021, as 74% of Forbes’ “Highest-Paid Athletes” list have publicly indicated they are vaccinated against Covid-19, but a few high-profile skeptics have dominated the discussion of athlete vaccination this year.

National Basketball Association star Kyrie Irving (No. 22 on the Forbes list)  emerged this year as perhaps the most outspoken opponent of Covid vaccine mandates in all of sports, as his refusal to get vaccinated led to his benching by the Brooklyn Nets for the first two months of the NBA season, explaining in October he was “standing with all those that believe what is right” in opposition to New York City’s vaccine mandate before returning to the Nets as a part-time player in December.

Novak Djokovic (No. 46), one of the most decorated men’s tennis player ever, said in April 2020 he was “opposed to vaccination” and “wouldn’t want to be forced” to take a vaccine, and has been steadfast in keeping his vaccination status private ever since, putting his status for the vaccine-mandatory 2022 Australian Open in serious doubt.

Fighter Conor McGregor (No. 1), whose $180 million in earnings easily made him Forbes’ highest-paid athlete, has not commented on whether he has been vaccinated, but he said “forced vaccination is a war crime” and “the vaccines have not worked” in since-deleted tweets. National Football League standout Joey Bosa is unvaccinated according to ESPN and the Los Angeles Times.

Several athletes have not explicitly said they’re vaccinated, but all evidence strongly suggests that they are: Kevin Durant (No. 10) and James Harden (No. 16) must be fully vaccinated to play Nets home games, DeAndre Hopkins (No. 33), Jimmy Butler (No. 35), Paul George (No. 38) and JJ Watt (No. 46), are all on 100% vaccinated teams according to their head coaches or teammates, Jalen Ramsey (No. 24) was part of the Los Angeles Rams’ recent Covid-19 outbreak among fully vaccinated players and Serena Williams (No. 28) was in attendance at the vaccine-required Met Gala.

Though he narrowly missed Forbes’ “Highest-Paid Athletes” list, Green Bay Packers quarterback Aaron Rodgers perhaps brought the most attention to himself for his vaccine skepticism. The NFL’s reigning most valuable player unleashed a firestorm after he was revealed to be unvaccinated after testing positive for the virus in November, despite suggesting in August he was vaccinated, telling reporters he was “immunized.” Rodgers later explained a primary reason for not receiving the jab was a concern about the vaccine causing “sterility and fertility issues,” a claim that has no evidence to support it, and took ivermectin after contracting Covid-19, a treatment that is not proven to treat the disease and can be dangerous, according to the Food and Drug Administration.

Some on the list got vaccinated after voicing significant hesitation toward or sharing conspiracy theories about Covid-19 vaccines. Hopkins, an All-Pro wide receiver for the Arizona Cardinals, said in a later-deleted July tweet he would consider retirement if forced to be vaccinated. Cardinals head coach Kliff Kingsbury said in September the team was 100% vaccinated, meaning Hopkins presumably got the jab. Last July, Formula 1 driver Lewis Hamilton shared and later deleted an Instagram video that discussed the debunked conspiracy theory that the vaccine was implanted with a microchip. Hamilton had an apparent change of heart, appearing in an advertisement for the United Kingdom vaccination campaign this month.

The following 29 athletes publicly said they received the vaccine (ranked by their order on the Forbes list):