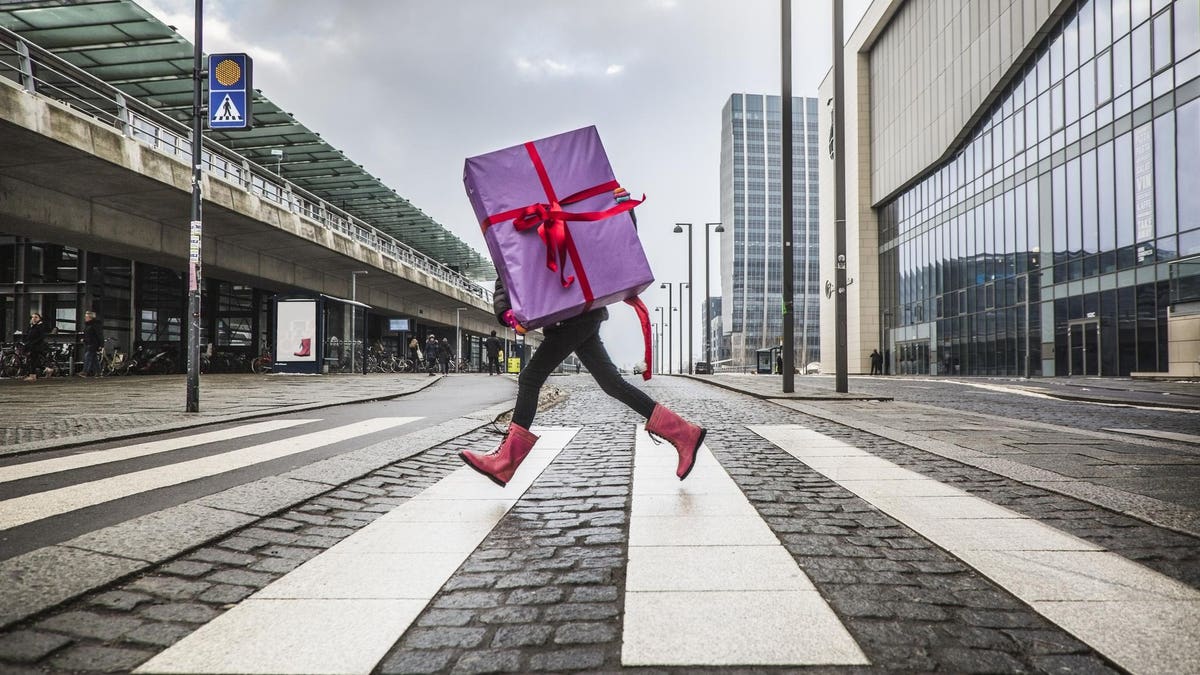 We’re getting down to the wire as far as gifting goes but that doesn’t mean there aren’t still great gifts that can be:

Rather than default to a gift card with a shrug, grab something off this list. There’s sure to be something that they’ll appreciate or need.

Anker’s Magnetic Battery is one of the most versatile magnetic battery packs on the market right now. Not only is it a 500mAh battery pack but it’s also a multi-positional stand. It’s MagSafe compatible, so it’s easy to pop it on your iPhone to get topped off. It’s compatible with the entire iPhone 13/12 range, though it pops out past the bottom edge of the iPhone mini. The only other minor quibble is that, like Apple’s official battery pack, charging is always on. There’s a button on the battery, but it’s there so you can check how much charge is left. Nitpicks aside, this is a great battery pack that comes in several attractive colors at, at $60, is roughly $40 less than Apple’s battery pack. Highly recommended.

After touting the praises of the Anker battery pack, you might wonder why I’ve got Apple’s official MagSafe battery pack on here as well. That’s because, despite it not having a stand and costing more, it’s a more refined product that is made to work with your iPhone. The Apple MagSafe Battery is an unblemished, soft-touch plastic rectangle with rounded edges, that clicks effortlessly to the back of your iPhone. It fits perfectly, even on the iPhone mini and uses iOS to inform you of its charge state, letting you monitor it from the Battery widget like you would any Apple accessory. It unfortunately can’t charge your iPhone to 100% for battery health reasons but it does, at least, support pass-through charging. Plug it in while attached to your iPhone and it’ll top off your phone first before charging itself. This battery pack is made to work with your iPhone and the polish shows. With frequent deals pushing the price far lower than its $99 MSRP, now is the time to grab one.

One last dip into battery power before we move on to other things. GoalZero’s latest iteration of Jump power banks have been absolutely amazing, blowing just about everyone else out of the water with their rugged styling and utility. They’re dustproof, waterproof (for up to 30 minutes in a meter of water), and have a built-in LED flashlight. The 10,000mAh power bank can keep just about any device going. What makes the Jump special is that it comes with a pair of jumper cables to help revive your car’s battery. This makes it an absolute no-brainer to keep in your trunk or glovebox. Even better, you can charge it back up from one of GoalZero’s solar panels, making this the ultimate battery pack for someone on your list that loves to travel far and wide.

Seemingly everyone at this point has a pair of AirPods. Which makes differentiating whose AirPods are whose a difficult task. That’s one of the reasons why I love these leather AirPod cases from Nomad. Made with Horween leather, and incorporating light piping to let the LED of the case shine through, the case ages beautifully and makes your AirPods stand out. The microfiber lining won’t stick to your case and doesn’t interfere with wireless charging. At just $35, it’s the perfect stocking stuffer.

One of the biggest surprises I’ve had in the past couple of years are these earbuds from LG. The TONE Free line of earbuds are nano-coated to kill bacteria, use UV light to sterilize the speaker mesh of the earbuds, and come in a wireless charging case. The FN6 doesn’t have active noise cancelling of the more recent release, the FN9, but when you’re running outside ANC can actually be detrimental. These have become my go-to running earbuds. They’re light, easy to use, reliably connect to my Apple Watch, and sound great. The battery life is impressive and the case stays charged seemingly forever. As an added bonus, the ear gels are hypoallergenic. As someone who developed a silicone allergy in my ears after months of wearing other earbuds, I’m extremely appreciative. I’ve also been informed by my teenagers that they don’t “look weird” like other earbuds (that aren’t Apple). So that’s a bonus. While the FN6 may be last year’s model, it’s still a fantastic kit. At discount prices of $75 or less it’s also a great bargain.

If you’re lucky enough to have found a Nintendo Switch OLED, then you’ll want a carrying bag that’s just as slick as the system itself. Waterfield has a tradition of making some of the best gaming bags in the biz and they’ve updated their fan-favorite Cityslicker case for the white Switch OLED. The white leather case will fit your Switch with the Joycons attached and is lined with soft microfiber to protect and clean your screen. There’s a small pocket inside for accessories and cords and an integrated cartridge holder just under the flap on the outside of the case. It comes with a carrying strap as well, in case you want to be that person that walks around with their Switch on their hip. If matching your case to your Switch isn’t your thing, there are several other color and material options, including two versions that swap out the ballistic nylon for waxed canvas. At $88, it’s on the upper end of accessories for your Switch OLED but its certainly the most stylish and useful case that I’ve found on the market.

If you’re looking for true “gaming on the go” then you’ll want to jump on this deal for the Razer Kishi mobile controller that comes with a month of Xbox Game Pass Ultimate. The Kishi fits either Android and Apple phones (make sure you get the right one) and turns your device into a true gaming powerhouse. It connects to the charging port of your phone, so there’s no Bluetooth lag. The controller gives you two thumbsticks, an 8-way D-Pad, four face buttons, and two shoulder triggers. It’s uniquely designed to fit any size phone without removing the case (even the iPhone Pro Max) When not in use, it collapses and clicks together, so it’s easy to transport. Especially if you play mobile games that require precise positioning or aiming, or even if you just want to play arcade-style games without fussing with on screen buttons, this is the mobile controller you’re looking for.

The Razer Zephyr is a revolutionary new clear mask with built-in N95 air filters and a host of LED lighting options. Let’s face it, masks aren’t going anywhere. When I was growing up, it seemed like every science fiction property showed the populace walking around with face masks or rebreathers. It was usually due to pollution, not a global pandemic, but potato, potatoe, our dystopian future is here. So why not dress the part? Joking aside, the Zephyr is a step towards making masks more sustainable, fun, and functional. The N95 filters last for 9 days and are replaceable. The intake fans run at two speeds (or can be turned off) and aren’t intrusively loud. The interior LEDs make it easy to see your face through the clear plastic (you can also turn off the lighting via the Zephyr app). Razer also includes an anti-fog spray to clean the mask, ensuring that it stays clear. The only caveat is that, unless you have a smaller face, your mouth motion is limited. Open your mouth wide, and you’ll end up eating the soft silicone face seal. Hopefully Razer is working on a larger version for those of us with bigger noggins (or just big mouths).

Razer has finally made their amazing doubleshot keycaps available in upgrade kits so that anyone with a mechanical keyboard can enjoy. Razer’s invested a lot in keycap upgrades in the past few years, developing oil-resistant, doubleshot keycaps that are thick, durable, and impressively sharp-looking. I’m especially partial to the pudding-style stealth keycaps, whose markings become visible only when the keyboard is on. They also have translucent sides to let your keyboard’s RGB shine through. They come in white or black. You can also get non-stealth keycaps in white, black, pink, or green with or without a matching coiled cable. And since you can pick up a set of keycaps for $20, you can mix and match to create your own unique style.

Oh, don’t make that face, you know someone who needs a good electric toothbrush to replace their utterly pedestrian, chewed on manual. Why not give them one that tracks their brushing and rewards them for good dental hygiene? Quip makes some of the nicest, most convenient sub-$100 electric toothbrushes on the market. The metal finishes are understated and feel great in-hand. The brush power strikes that mid-range between “is this thing on” and “oh no, there goes my fillings.” Plus, it’s perfect for travel with a mirror mount that doubles as a travel cap. With the smart motor, you earn points for daily brushing and there are challenges that let you earn even more. Then you can redeem points for other, equally thoughtful, oral health products in quip’s lineup like refillable mouthwash, gum, floss, and more.