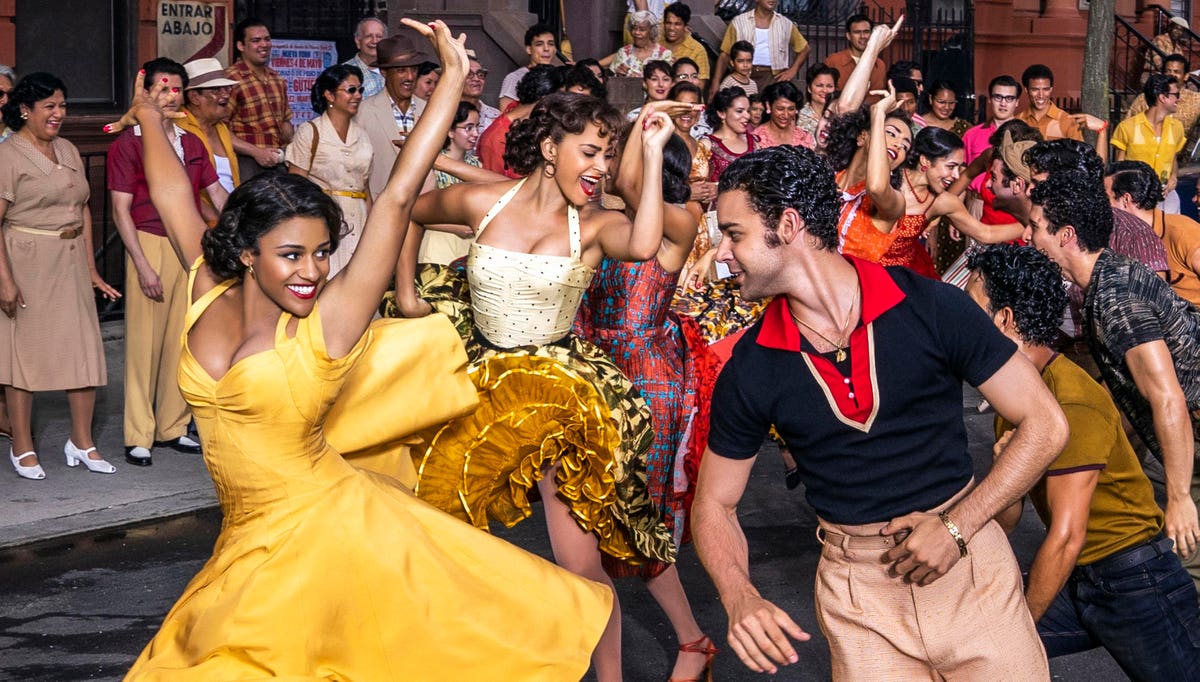 West Side Story, starring Rachel Zegler and Ansel Elgort, opened last night with $800,000 in Thursday previews. That’s about on par with the Dear Evan Hansen which earned just $7.5 million in its opening weekend this past September. Conversely, it’s higher than the $500,000 earned by Bridge of Spies toward a $15.3 million debut in October 2015. Disney and friends are obviously hoping that the Steven Spielberg-directed and Tom Hanks-starring Cold War flick is the correct comparison, as pre-release tracking suggested an over/under $15 million debut. Spielberg is obviously the “butts in seats” marquee filmmaker, and the source material is a beloved Tony winning (and then, upon feature film debut, Oscar-winning) stage show. The film is the last, best shot at a genuinely commercial Oscar season contender, give or take Dune and House of Gucci.

Moreover, the debut this weekend, amid rave reviews and strong Oscar buzz, is a chance to again show that the live-action musical, while suffering from a Covid-era decline, isn’t remotely dead. Like the western, the musical is one of those genres that everyone claims is dead and yet scores big whenever Hollywood bothers to make one of appropriate size and scale. It’s been relatively bankable at least since Moulin Rouge earned $185 million on a $50 million budget 20.5 years ago. That was followed by Chicago ($307 million), Hairspray ($203 million), Sweeney Todd ($155 million), Mama Mia ($609 million), Les Misérables ($442 million), the Pitch Perfect trilogy, Into the Woods ($214 million), The Greatest Showman ($434 million), Mama Mia: Here We Go Again ($375 million).

We can also include recent music-driven melodramas like A Star Is Born ($424 million), Bohemian Rhapsody ($905 million) and Rocketman ($195 million). Let’s not forget the live-action adaptations of Disney’s Beauty and the Beast ($1.263 billion), Aladdin ($1.055 billion) and The Lion King ($1.66 billion), or the $600 million-$1.5 billion likes of Tangled, Frozen, Moana, Sing, Coco and Frozen II. While Walt Disney’s Encanto isn’t a hit by pre-Covid standards, it’s already the biggest domestic-grossing animated film since Frozen II, with only the jukebox musical Sing 2 standing in its way. While they aren’t hits, two of the biggest-grossing “adult-skewing dramas” this year were the acclaimed In the Heights ($30 million) and Jennifer Hudson’s Oscar-buzzy Aretha Franklin biopic Respect ($24 million).

Again, they aren’t hits, but if The Last Duel had cracked $30 million domestic it’d probably be sitting right alongside House of Gucci in the Oscar race. Heck, even Christmas With the Chosen: The Messengers ($12 million-and-counting) is part religious drama and part music show. Heck, the live-action musical has been such a consistently successful sub-genre (alongside horror and Marvel/DC movies) that I honestly thought that Cats would actually be a hit right up until the end. Bad reviews, a lack of marquee characters and a source material that was known without being liked did that one in, but Disney+ has been chasing adult subscribers with Hamilton last July and Peter Jackson’s The Beatles: Get Back this past Thanksgiving.

You can argue that I’m being generous with my definition of what constitutes a movie musical, and you’re free to discount any you feel don’t apply. I’d jokingly count Fathom Events’ theatrical release of Rocky IV: Rocky Vs. Drago, but the director’s cut makes the film feel less like an 80’s style MTV movie (boo!) and more like a small-scale character drama (yay!). I’m pretty confident arguing that a Steven Spielberg-directed, critically-acclaimed live-action musical re-adaptation of West Side Story would have been a solid commercial hit (in relation to its $100 million budget and likely-to-be-leggy holiday legs) in non-Covid times. Whether it still becomes a genuine hit, or even a “successful disappointment” and big-deal Oscar contender, I still have faith in Jon M. Chu’s Wicked.