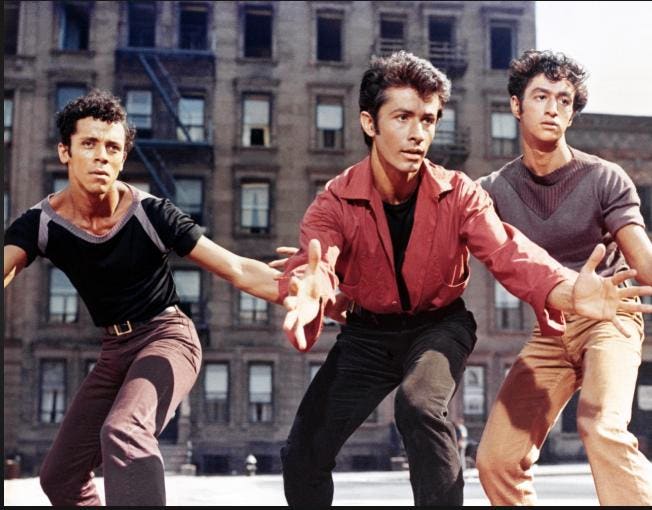 George Chakiris recalls being aboard a chartered jet with Stephen Sondheim, Jerome Robbins and Arthur Laurents bound from New York to Manchester for the UK production of West Side Story that was to open at the Manchester Opera House. Chakiris, 87, now looks back at that period of his life as though it were yesterday.

“The only person (associated with the musical) that wasn’t on the plane was Leonard Bernstein,” he says via Zoom with a laugh. “It really bonded us all in a way.”

By 1958, Chakiris already had appeared in several Hollywood musicals as a dancer and was recommended by Robbins, the celebrated choreographer, to play Riff, leader of the Jets, in the UK stage production, first in Manchester, followed by an extended run at London’s West End. The son of Greek immigrants later would be cast in the role of Bernardo, leader of the Puerto Rican Sharks gang, in the acclaimed big screen adaptation of the musical, and would go on to win a Best Supporting Actor in 1962 for his career-making performance. He and his screen partner, Rita Moreno, who played his girlfriend, “Anita,” attended the Academy Awards ceremony together, and both won that night, though Chakiris was so surprised when presenter Shirley Jones called his name that he simply walked up on stage, delivered a simple thank you to the audience and then exited the stage with his award.

Born in Norwood, Ohio, Chakiris lived in Arizona before his family settled in Long Beach, Calif. As a youth, he was drawn to performance—dancing, singing and acting—and as a teen began landing bit parts in movies. He appeared in dance numbers with the likes of legendary stars including Rosemary Clooney and Marilyn Monroe. You can see him on the staircase alongside Monroe in the Diamonds Are A Girl’s Best Friend number in 1953’s Gentleman Prefer Blondes, and he is one of four dancers with Clooney as she croons Love, You Didn’t Do Me Right in 1954’s White Christmas. The handsome and exotic-looking actor subsequently landed roles in The Country Girl, The Girl Rush, Meet Me In Las Vegas and Jacques Demy’s The Young Girls Of Rochefort. He had the leading role in Two And Two Make Six and subsequently had a supporting role in the Charlton Heston starrer Diamond Head. A vocalist from a young age, he launched a career as a pop singer in the early 1960s and recorded with famed British music producer Joe Meek.

Chakiris continued to act in dozens of films and TV shows and on stage over the next several decades before delving into jewelry design. The George Chakiris collections are on display at Tokyo’s prestigious Mitsukoshi Department Store as well as online on his website at GeorgeChakiris.com.

Though he has largely retired from acting, Chakiris has a small role in the heartwarming drama Not To Forget, which counts fellow Oscar winners Cloris Leachman and Olympia Dukakis, who both passed away this year, in the cast. The drama delves into the subject of Alzheimer’s disease and the toll it takes on a family. A self-centered young con artist (Tate Dewey) is sentenced by a judge to live with his grandmother (Karen Grassle, Little House On The Prairie), who is affected by Alzheimer’s disease. With his cronies, he initially ponders a way to bilk her out of her estate before realizing the importance of family. Chakiris plays a banker who is naturally suspicious of the young man’s motives when he and his girlfriend show up to add his name to his grandmother’s account.

Chakiris says he was eager to do the role not only because it raises awareness about the debilitating disease but also so he could work on a film with Dukakis, a fellow Greek-American, whom he had known for many years. The modestly budgeted film, written, directed and produced by Valerio Zanoli, also stars Oscar winners Tatum O’Neal and Louis Gossett Jr. It is in limited release in theaters via Vertical Entertainment.

Earlier this year, Chakiris published his memoir, My West Side Story, which coincides with Steven Spielberg’s new adaption of the iconic musical, due in theaters Friday Dec. 10.

Angela Dawson: Have you seen Steven Spielberg’s version of West Side Story? Did you attend the premiere?

George Chakiris: Not yet, but I absolutely want to see it. I was invited to the New York premiere but I had a really horrible cold so I didn’t want to get on a plane (from Los Angeles) but I’ve heard that it’s fantastic, which is not a surprise. You have high expectations of Steven Spielberg and, clearly, he is not going to disappoint anyone. So, it all sounds grand and I can’t wait to see it.

I have a friend Larry Mirisch (founder of the Mirisch Agency) who’s (producer) Walter Mirisch’s son, who screens movies at his home. He’s got a huge set up, which is where I like to see movies if I can.

Dawson: West Side Story lyricist Stephen Sondheim recently passed away. Besides West Side Story on stage and in the film, you also starred in a stage production of Sondheim’s Company, in which you played “Bobby.” Would you care to share your thoughts on him?

Chakiris: What can I say that hasn’t already been said? He was so extraordinary. I’ve watched some of the interviews he did over the course of his career, and the thing you notice is how articulate he was whenever he was making his point, and he did it so well that anybody could understand what he was saying. So, his way with words was not just as a writer but in the way he spoke as well. My impression of him was that he was kind. He never said anything bad about anyone. He found a way around that and keeps the (conversation) up, and still told the truth. I loved that about him. I wish I’d gotten a chance to know him better.

When I was doing Company, I got to know him a little bit—that was in 1971, a long time ago. He also was involved in the London company of West Side Story. That was the first time I met him. Being hired to play within that company, we rehearsed in New York and then got on a chartered plane to Manchester where the show first opened before going to London.

With Company, I got to spend a little more time with him because he came to a few of the performances. He also came to the performance we did in San Francisco.

Dawson: Do you ever pinch yourself with all the wonderful legends that you worked with over the years including Rosemary Clooney and Marilyn Monroe?

Chakiris: I guess so because I really love that part of my life. I loved being a chorus dancer because we got to be around these extraordinary people. Working on the Diamonds Are A Girl’s Best Friend number, you didn’t stop to think what was going on and what the future would be like. Who knew? Jack Cole (aka The Father Of Theatrical Jazz Dance), who choreographed that number, was incredible. Marilyn always wanted to work with him and she was absolutely right because he was fantastic. I never spoke to her but I was around her other times as well. The thing I noticed that made me like her is that she was very quiet and very concentrated on the work. During the shooting of that number, if they cut for any reason, she didn’t look in the mirror, she didn’t go to her dressing room but simply went back to her starting position to begin again. I think that says something about her, something really good about her.

I also got a chance to dance with her in There’s No Business Like Show Business. Jack Cole did the Heatwave number with her in that movie. During the rehearsal process for that, there was a cocktail party at the end of the day for the dancers and actors. Again, Marilyn came in but arrived rather quietly. She didn’t draw a lot of attention to herself. She was dressed very simply, but very nicely. My dance partner said to me, “Why don’t I go over there and ask (Monroe) to give you a kiss on the cheek,” to which I responded, “No!” But she went over to Marilyn anyway and asked her. I could overhear them because they weren’t that far away. So, Marilyn looked over at me and sweetly said, “But I don’t know him.” That tells you something about her.

Dawson: What attracted you to the role in Not To Forget? It’s not a big role but you have a wonderful group of actors including Cloris Leachman, Tatum O’Neal, Louis Gossett Jr., and Olympia Dukakis.

Chakiris: Two things: it’s about Alzheimer’s disease and the other was Olympia Dukakis. I first met her on the West Coast when she won her Oscar for Moonstruck. I really admire her as an actress.

Dawson: Is Alzheimer’s disease awareness something that is personal to you?

Chakiris: Yes, but for the grace of God go I. C’mon, we all have to care about it. It doesn’t have to be personal for you to take it personally. It’s better that you speak up in any way you can. I’m not an advocate but we all know about how horrible it is and you can’t help but think about it. So, to be part of something like this that takes it seriously and has wonderful people in it was what made the difference to me. I did very little on it. I worked a whole day.

Dawson: You have two scenes: one at the bank and one at the funeral where you’re standing next to Cloris.

Chakiris: That’s right. And those scenes were shot in close proximity to each other. You could walk from one set to the other. Unfortunately, I never had a chance to speak to her.

Dawson: Though you don’t have any scenes with Olympia, did you two chat about being in this film together?

Chakiris: No, but I remember seeing her in a few productions. I loved Moonstruck; I love what she did in Moonstruck. And I love her more, of course, because of our shared Greek connection. That is personal and I really love that aspect of it.

Dawson: Speaking of your Greek heritage, when you were starting out in show business, did you ever feel pressured to Anglicize your last name or use a stage name?

Chakiris: For about five minutes, yes. I was under contract to Paramount in 1955. In those days, nobody had an ethnic name. Arnold Schwarzenegger would have had to change his name to Arnold Jones. So, they tried to change my surname to Gardener, but it didn’t feel right. Then they tried George Kerris. I’m credited on one movie (Song Of Love) with that name. When it was over, I went back to George Chakiris.

Dawson: When you look back on West Side Story, does it seem a long time ago or like yesterday?

Chakiris: It does seem like it’s not that long ago but at the same time I do feel a bit of distance.