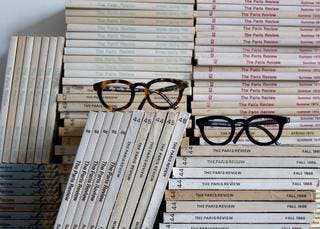 At first I thought, “that’s weird.” Then I realized it makes total sense that Warby Parker has teamed up for a collaboration with The Paris Review.

Reading and glasses are clearly well matched—and kudos to the frames brand for partnering with one of the most prestigious outlets for said reading. Founded in 1953, The Paris Review has published some of the best fiction, poetry, essays, interviews, and art.

As part of the collab, Warby Parker is reissuing The Roland frame in two colors: Jet Black and Brioche Tortoise with the price starting at $95. Warby Parker calls it “an idiosyncratic shape, with ample, round acetate rims and a keyhole bridge—equal parts literary and rebellious in spirit.”

The brand has also designed a custom lens cloth festooned with the hadada bird, part of The Paris Review’s logo.

Also, their stores are modeled after libraries, and they have their own in-house imprint, Warby Parker Press.

I apologize for ever doubting the logic of all of this.

Lastly, in celebration of the collab, Warby Parker is making a donation to The Paris Review Foundation, the nonprofit behind the magazine, which fosters the development of writers and artists and to promote public appreciation of excellence in the literary and graphic arts. And as with all Warby Parker frames, for each pair purchased, a pair will be distributed to someone in need.