Even before the final beat of music in Nathan Chen’s short program, he knew he had done it.

After completing two quadruple jumps — including one in a quadruple, triple-jump combination — and dancing across the ice in his simple black tuxedo, Chen finished first in the men’s short program at the Beijing Olympics on Tuesday. By a lot.

His score of 113.97 points set a world record and also set him up perfectly for a shot at the coveted prize that has eluded him.

When he was done with his program, performed to “La Bohème,” by Charles Aznavour, Chen punched the air in a celebration and had to catch himself.

“I almost never do something like that,” the 22-year-old Chen said afterward. “I was like, ‘Why did I do that?’”

From the outside, it was obvious.

At the 2018 Games, Chen twice skated terrible short programs — one in the team event, the other in the men’s singles event. In the individual competition, he performed so poorly that he was 17th going into the free skate.

Deciding he had nothing to lose, Chen attempted — and landed — six quadruple jumps in the free skate, instead of the five he had planned. That bold performance lifted him to fifth place, tantalizingly close to the medals that were out of reach after his short-program mistakes. Since that disappointment, Chen has dominated the sport, becoming a three-time world champion.

So after Chen showed his best on Tuesday — finally, at an Olympics with barely any errors — he said it was a relief. He won’t revel in his accomplishment for long, though, he said, because there is still work to do. 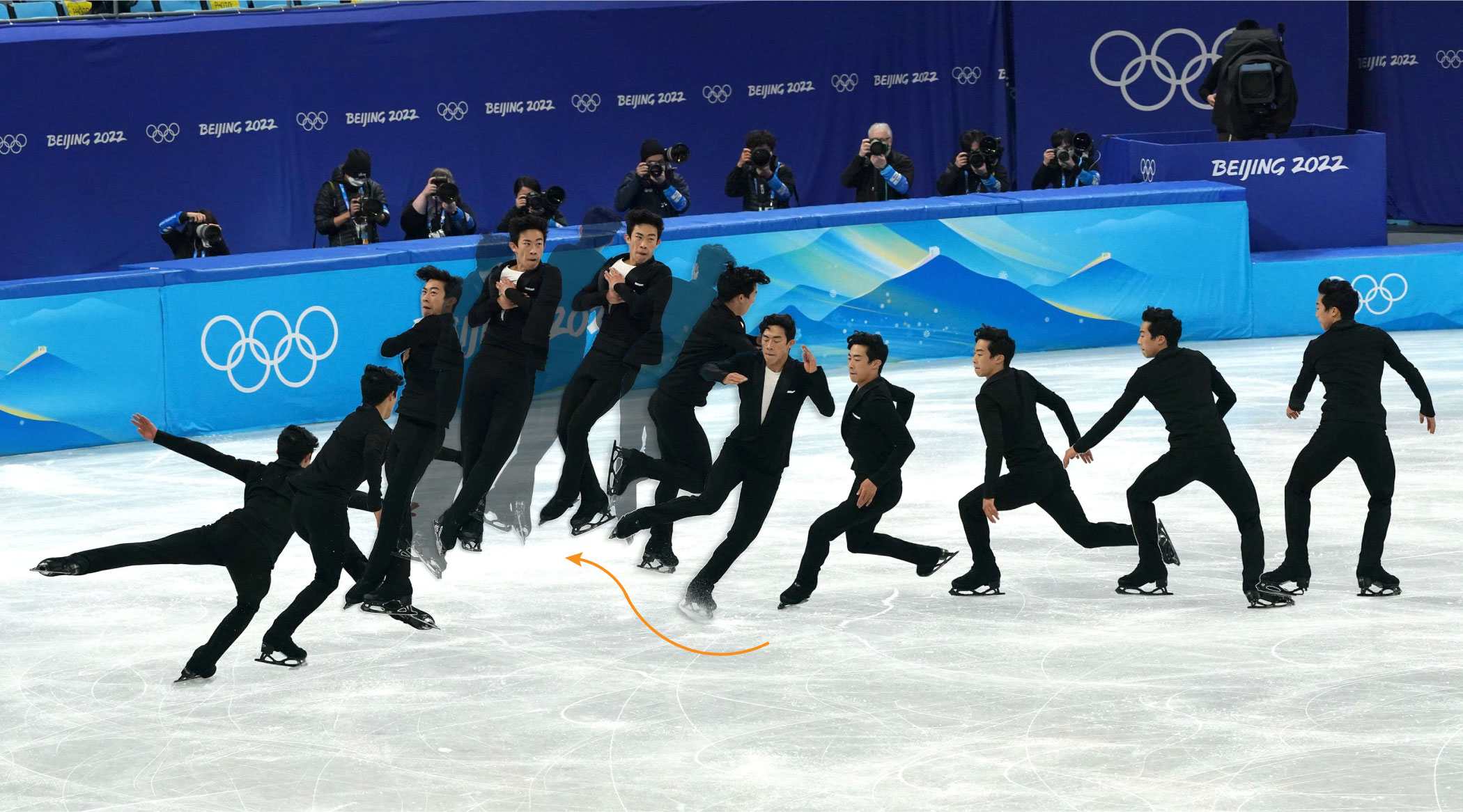 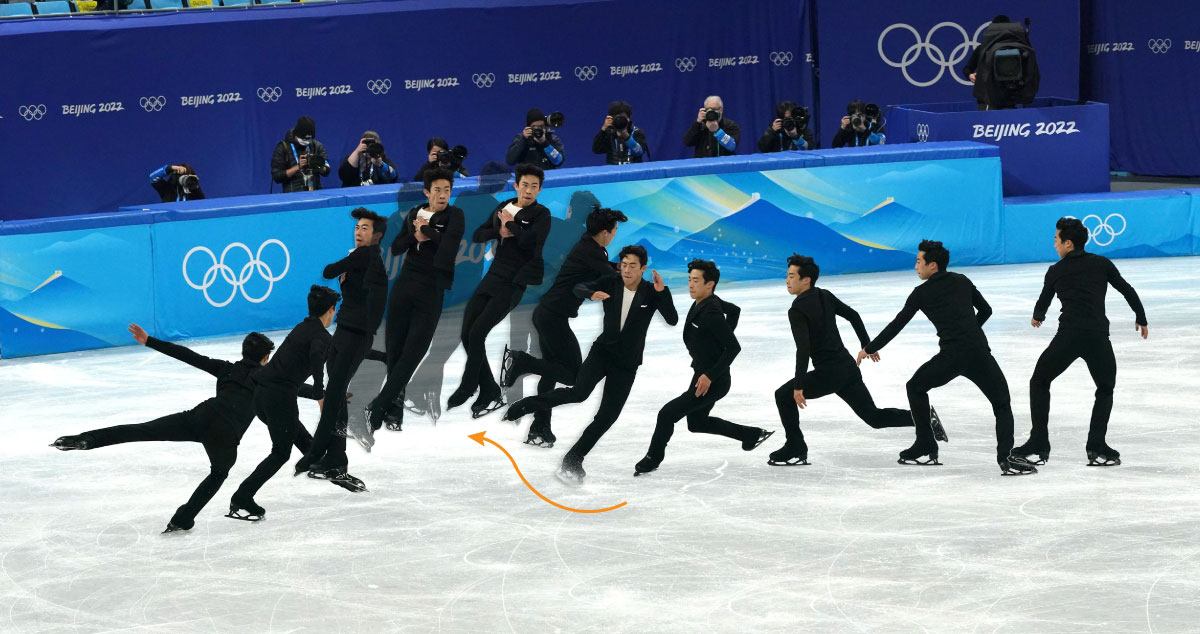 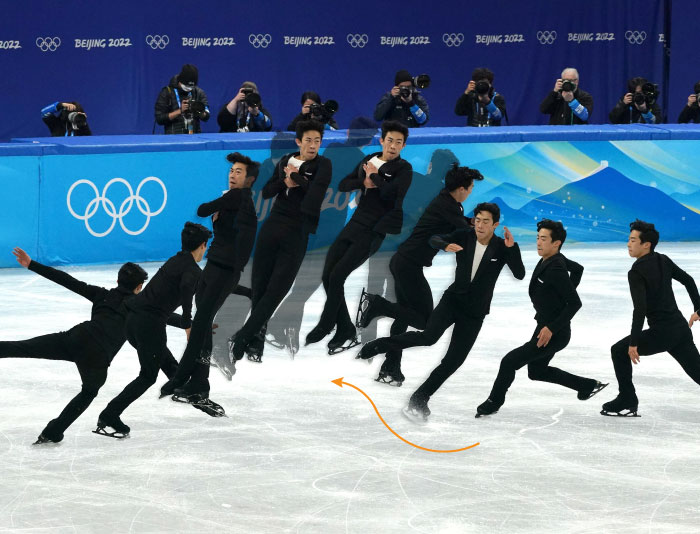 The gold medal will be decided on Thursday morning after the free skate (Wednesday night in the United States), and Chen’s main competition will be two Japanese skaters: Yuma Kagiyama, an 18-year-old former child television and movie star who knows how to perform with flair, and Shoma Uno, 24, one of only two skaters who has beaten Chen since early 2018. Kagiyama was second in the short program, 5.85 points behind Chen. Uno, the Olympic silver medalist in 2018, was third, 8.07 points back.

Competing in his first Olympics, Kagiyama got the mostly Chinese crowd to clap along to his entertaining performance to Michael Bublé’s “When You’re Smiling,” as he skated a high-power, high-energy program. Uno, who skated to classical music, was just as stunning. Even when he put his hand down on the second jump of his quadruple-triple combination, it didn’t hurt his score much.

Afterward, Uno sent a warning to his competitors: “I will add more complicated and difficult jumps in my free skating.”

Conspicuously missing from those top competitors was the two-time defending Olympic champion Yuzuru Hanyu, one of Chen’s top rivals, and the man who held the previous short-program world record. Hanyu, in a sparkly outfit studded with crystals, finished a distant eighth on Tuesday, 18.82 points behind Chen. A hole in the ice was to blame, he said.

Hanyu opened his program by bailing out of a quadruple salchow. The crowd gasped.

“That was some accident but it’s OK,” he said, explaining that there was a divot in the ice from what was perhaps another skater’s toe pick. “I have one more chance. I have lots of time with the music and many jumps in there, so I can be my best.”

Hanyu bounced back quickly to land a quadruple, triple-jump combination and a triple axel during the kind of artistically beautiful performance for which he is known. But the missed quad, which earned zero points, cost him. He is so far behind Chen and the other leaders that it will be a long shot for him to win any medal.

Jason Brown, the only other American in the men’s event after Vincent Zhou tested positive for the coronavirus on Monday and withdrew, doesn’t have much of a shot to win a medal, either, but he said he was not in a mood to complain. Close calls with people infected with the virus, including a coach last month and now Zhou, have made him appreciate every moment here. This is his second Olympics; he finished ninth at the 2014 Games in Sochi, Russia.

Brown, 27, was the last to skate his short program, floating across and above the ice in a passionate, effortless performance to “Sinnerman” by Nina Simone that demanded the fans’ attention. He is one of few top male skaters who don’t have a quadruple jump in their performance, but he made up for that with his exquisite skating skills and musical interpretation to finish sixth entering the free skate.

“We so often get wrapped up in the technical, the technical,” he said. “It’s not going to stop me from pushing the artistic side. I want to create more art.”

While waiting to skate, he said, he heard cheers erupt after Chen’s performance and knew his teammate had nailed it. Now Chen just has to do it all over again this Thursday. He’s not counting on it being easy.

“Whatever happens in the short program is not indicative of what will happen in the free program,” he said, perhaps reminding himself that the real feeling of relief — the one he has been waiting for since 2018 — is still a few days away, when he will walk away with the gold medal, finally. Or not.