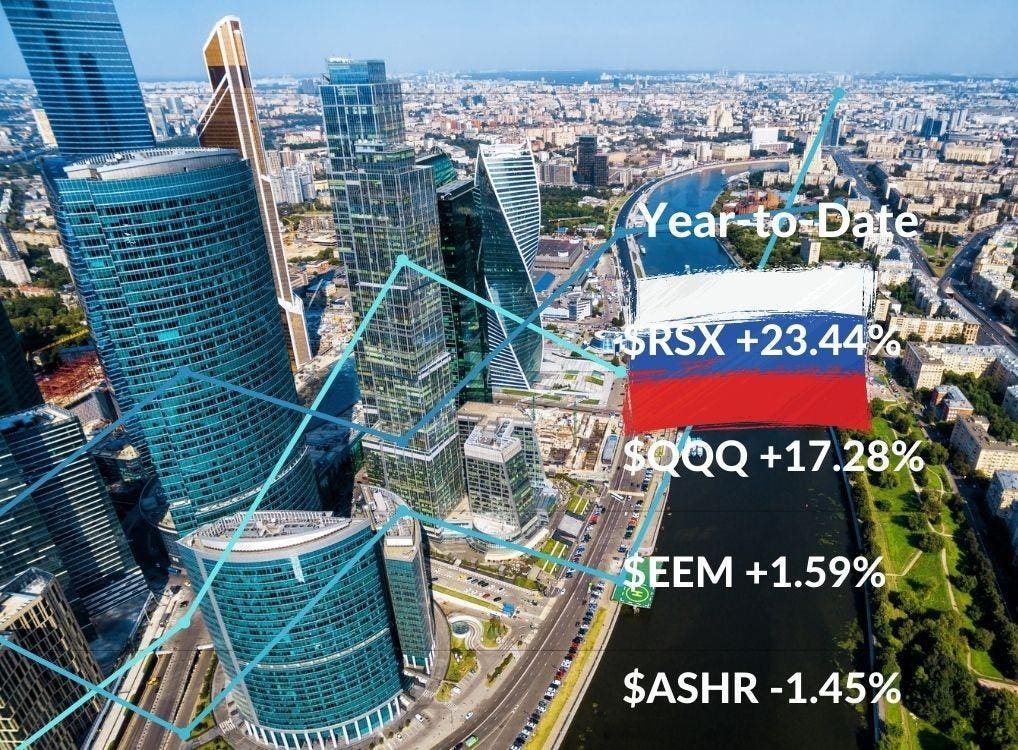 You wouldn’t know this unless you’re invested. And I, for one, am not. But the Russian Amazon , creatively called Ozon, is beating its American originator year-to-date. It did an initial public offering last year. It’s been a good return on investment for investors. Compare that to Chinese IPOs like Didi; a total money loser.

Six Russian companies have successfully gone public in the past 12 months and at least 10 more are rumored to go public in the coming months.

Home builder and property-tech company Samolet, value retailer Fix Price, paper and pulp giant Segezha and healthcare services and oncology treatment provider EMC were the big Russian IPOs so far. Ozon and Samolet more than doubled their market caps since listing. Ozon’s market cap is now around $10.5 billion and is open to U.S. retail investors. Samolet is only listed in Moscow, and not a buy for the Robinhood crowd.

The shiny, modern, international finance center of Moscow was always designed with the hopes that it would one day be the Russian Frankfurt. Then again, the Frankfurt Exchange was created over 400 years ago. The Russian one: 28.

When it comes to the stock market, Russia was always the last placed finisher of the big four emerging markets, always overshadowed by China, India, Brazil and South Africa in terms of trading volume and market capitalization of the exchange.

Ozon listed on the Nasdaq in November 2020. Russia is increasing its own capital markets and new companies are opting to list at home to help it grow, sometimes doing dual listings, as Ozon did.

“We understand there are more than 10 Russian companies planning to IPO in the next six to 9 months,” Dmitry Panchenko, head of Tinkoff Investments told me. “None of these companies in the pipeline are from the oil and gas sector, which should be encouraging to investors. The companies that are looking to go public have all disrupted their sectors — in retail, pharma, car sharing — or are doing business in interesting new ways,” he says.

Here are some companies in the Moscow rumor mill:

“You’ll own nothing and be happy.” Delimobil is playing to the World Economic Forum’s Agenda 2030 of a renter, non-owner society. Delimobil, though…they’ll be the owners in this one. They are one of the leaders in the booming car-sharing market with a fleet of more than 16,000 vehicles. Russians are switching to so-called shared mobility services because cars are costly and incomes are flat. Moscow and other cities see car-sharing as part of the solution to fight traffic in a sustainable manner, though it is unclear how less car ownership, more car rentals, would reduce traffic. Regardless, Delimobil is a play on the “Own Nothing” agenda of Davos. If you buy into that, especially for cars, then Delimobil is worth a look.

Reuters reported that they are planning an IPO this fall with a dual listing in Russia and the U.S. and may raise over $350 million.

Softline is an IT-services provider working with vendors like Microsoft , Oracle, and IBM . The company has a track record of outperforming in the IT market and a strong history of M&A growth. They’re headquartered in London, have around 5,000 employees and reported a turnover in 2020 of $1.8 billion.  It will likely draw investor interest as yet another portfolio piece for the theme of global digital transformation. Softline’s revenues were $900 million in 2016 and hit $1.8 billion last year.

This is Forbes listed billionaire Boris Jordan’s (CuraLeaf founder) insurance-tech company with leading positions in all key insurance segments. Renaissance is building a bigger insurance market in Russia, a country where insurance products are rarely sold en masse. This trend should change, to mimic the rest of Europe. There is some opportunity there if Jordan gets it right. Renaissance wants to follow in the footsteps of Tinkoff, a Russian fintech/bank now valued at around $20 billion.

This is a play on the retail investor boom. Purchases of securities by retail investors in Russia reached $6.6 billion in the first quarter, more than double the volume of net purchases for 2020, according to Central Bank of Russia data. The SPBEX is the only exchange in Russia which allows retail investors in Russia to trade Apple , Tesla and thousands more popular stocks legally, with good liquidity and during local working hours. The Moscow Exchange is only now getting in on this act, but it will be hard for them to catch up to SPBEX any time soon. Some 12 million retail investors already trade on that exchange via 46 brokerages and the business is growing fast. Could easily be an M&A candidate at this rate.

Mercury Retail is Russia’s largest ultra-convenience retailer, operating a vast network of approximately 13,500 neighborhood stores nationwide. The company has two highly recognizable brands – Red & White and Bristol – both of which are focused on urban, nearby, easy access shopping. Think 7-Eleven, or better yet, a Duane Reede in New York City.

The company has reported six straight quarters of double digit (like-for-like) revenue growth and generated approximately $8 billion in revenue last year. It’s profitable. It has the highest EBITDA margins in the Russian retail sector thanks to a lean and efficient business model.

A leading foodtech player and health-food brand that also operates a chain of retail shops. Think of it as Russia’s Trader’s Joe or Whole Foods , but with one of the most recognized and sought-after brands in the country and a popular app. Here is a deep dive into company’s business model, as the word “foodtech” escapes me. Knock yourselves out.

Some call this the Russian TJ Maxx. It’s a pioneer and leading player in the off-price, “outlet” category. They have no real competition. Its business model is similar to that of TJ Maxx as Familia provides a ‘treasure hunting’ experience to customers, allowing them to bargain hunt for name banded items at highly discounted prices. In contrast to the off-price retailers in the U.S., Familia operates in a market which is highly fragmented and has a much bigger potential for growth. Goldman Sachs and Baring Vostok bought 49% in the company in 2016, while TJX bought 25% in 2019 for $225 million. Looks like they see something special there.

These guys are the world’s largest producer and supplier of something called hot briquetted iron (HBI), an environmentally friendly raw material for the “green steel industry.”

Ah, so it’s going into the Russian ESG funds. Got it!

Bloomberg said they are hearing about an IPO in 2022, expecting a capitalization of about $20 billion. The steel industry is one of the dirtiest industries in terms of air emissions: according to World Steel, it accounts for about 7-9% of global greenhouse gas emissions. Companies in the sector are accelerating the transition to green metallurgy under pressure from investors. Russia wants to move in this direction because it is the best way to capture the climate capitalists at the sovereign wealth funds in Europe, especially those in the Nordic countries that have an affinity for Russian investment.

This bank’s logo can be seen shining in blue neon not far from the Moscow city center, across from the White House. It was once private. Got crushed. And then got taken over by the Central Bank. Now it is one of the largest state-owned financial groups in the country and will be privatized in an IPO in 2022. This is a well known financial brand in Russia and if they get their act together, could take some share away from Sberbank.

Otkritie doesn’t want to be a full blown financial ecosystem like Sberbank. Instead, it sees itself as a financial partner business-to-business segment, plus a traditional bank with a strong focus on retail clients. In the first half of this year, the bank’s profit increased 2.6 times year over year to $282 million, while revenue for first half grew 23% $1.37 billion.

That’s the leaderboard, dami i gospoda.

Alina Sycheva, head of Capital Markets Origination at Sova Capital in London warns that the Russian companies hopping on the bull market bandwagon “will be heading into busy and crowded market.”

The Russian pipeline of IPOs has been growing steadily. Note that all but one of the candidates to go public are in the old school space of fossil fuels and metalwork.

“Russian businesses have matured,” says Sycheva. “They’ve weathered the pandemic by adjusting their business model. There are a number of companies in advanced preparatory stages to go public.”