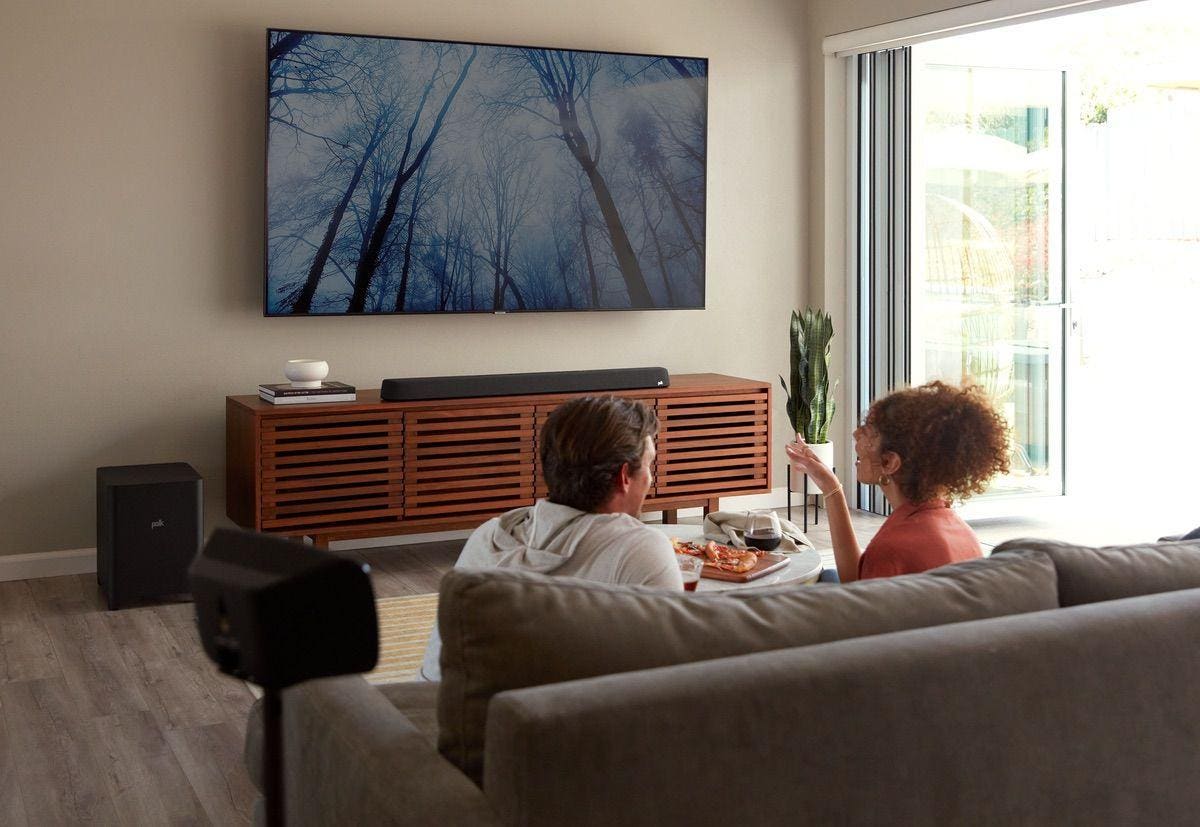 Polk Audio has been making speakers since 1972, when Matthew Polk, George Klopfer and Sandy Gross formed their business after meeting at John Hopkins University. The three friends set about making a sound system for a local Bluegrass music festival. The rest is history and now the brand is part of the Sound United family, where it sits alongside other great audio brands like B&W, Marantz and Denon.

The MagniFi Max AX soundbars achieve sound with height effects from dedicated up-firing speakers that provide the overhead sound that Dolby Atmos and DTS:X object-oriented sound formats offer. In addition, Polk’s patented SDA technology eliminates crosstalk to create a wider soundstage that projects beyond the soundbar to fill the room with surround sound.

Both the MagniFi Max AX and MagniFi Max AX SR include a 10-inch down-firing subwoofer that delivers the deep and growly bass that makes a trip to a movie theater so exciting. By offering a wireless connection to the subwoofer, the unit can be placed almost anywhere convenient, plus there’s no cable clutter.

As all rooms are different, a good soundbar needs to offer the controls to tweak their sound to match the room’s acoustics. Both new Polk soundbars include settings such as One-touch Movie, TV and Music Modes that optimize MagniFi Max AX’s bass response, clarity and soundstage for most listening scenarios.

There’s also a Night Mode that boosts speech clarity while lowering the thump of the bass, making it possible to enjoy a movie late at night without waking the children or neighbors. In addition, VoiceAdjust technology raises the volume of voices over other soundtrack elements, making it easier to hear the dialog. Meanwhile, BassAdjust balances the low-end response of the sound bar and the subwoofer for a seamless crossover of the lower frequencies.

A good soundbar is also great for listening to music. Both these Polk models include support for Wi-Fi streaming via Apple AirPlay 2, Google Chromecast, Spotify Connect, Alexa–enabled music services, plus a Bluetooth function built in. The MagniFi AX series soundbars can also be used to create a multi-room music listening system.

Polk says that setting up the new soundbars is simple thanks to three high-speed 4K HDMI inputs and one output for connecting to a TV. The HDMI inputs can be easily switched and are ideal for attaching a Blu-ray player, gaming console, an Amazon Fire Stick TV, or a streaming box. Connection to the TV is via HDMI eARC or ARC and Polk includes a suitable HDMI cable in the box. There’s also an optical input for legacy TVs that could be used to attach something like a CD player.

The Polk MagniFi Max AX includes a remote control and works with most TV remotes straight out of the box. An intuitive front-panel OLED display shows any adjustments and automatically dims when not in use. The MagniFi Max AX is also Roku TV-ready for easy configuration and control.