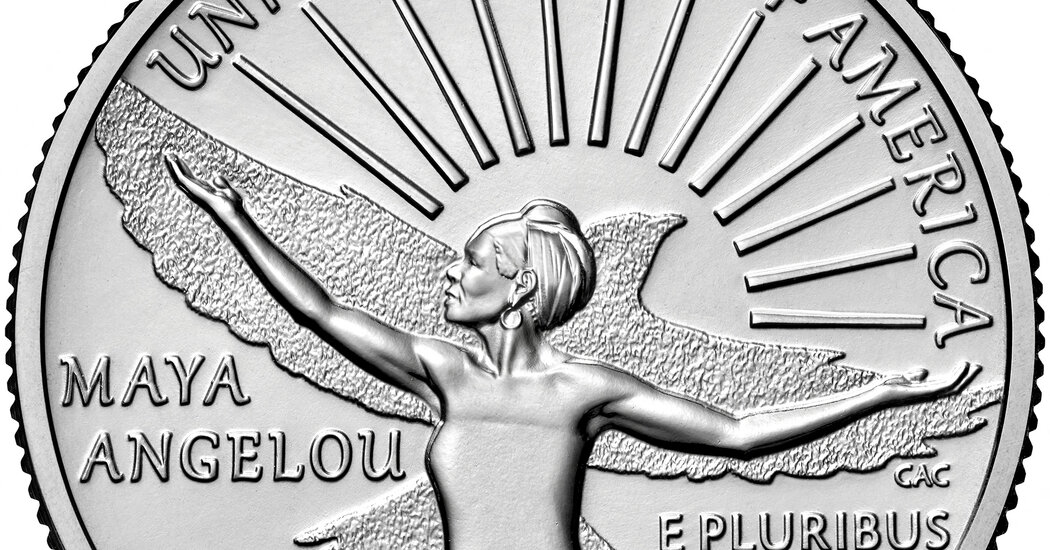 The writer and poet Maya Angelou has become the first Black woman to have her likeness depicted on the quarter, the first in a series of coins commemorating pioneering American women that began shipping this week, the U.S. Mint announced Monday.

“It is my honor to present our nation’s first circulating coins dedicated to celebrating American women and their contributions to American history,” Ventris C. Gibson, the deputy director of the Mint, said in a statement. “Maya Angelou,” she added, “used words to inspire and uplift.”

Ms. Angelou’s landmark 1969 memoir, “I Know Why the Caged Bird Sings,” documented her childhood in the Jim Crow South and was among the first autobiographies by a 20th-century Black woman to reach a wide general readership.

In it, she writes, “there is no greater agony than bearing an untold story inside you.”

Ms. Angelou recited a poem at President Bill Clinton’s first inauguration, in 1993, and was awarded the Presidential Medal of Freedom by President Barack Obama in 2011.

Ms. Angelou, who died in 2014 at 86, was “one of the brightest lights of our time — a brilliant writer, a fierce friend and a truly phenomenal woman,” Mr. Obama said at the time.

The quarter featuring her likeness — created by Emily Damstra, a designer, and Craig A. Campbell, a medallic artist — depicts Ms. Angelou with her arms uplifted, in front of a bird in flight and rays of sunlight streaking out from behind her. The images were both “inspired by her poetry and symbolic of the way she lived,” the Mint said.

Ms. Angelou is featured on the “tails” side of the 25-cent piece; the “heads” side includes a portrait of George Washington.

The coin is the first in the American Women Quarters Program, a four-year effort in which the Mint will issue five quarters a year to honor women in fields including women’s suffrage, civil rights, abolition, government, humanities, science and the arts. This year’s other honorees are Sally Ride, the first American woman in space; Wilma Mankiller, a Native American activist; Nina Otero-Warren, a leader in New Mexico’s suffrage movement; and Anna May Wong, the first Chinese American film star in Hollywood.

The Mint has previously issued coins featuring Black women, including a commemorative gold coin in 2017 that depicted Lady Liberty as a Black woman.

The suffragist Susan B. Anthony was the first woman to be featured on a circulating U.S. coin; silver dollars with her image were first released in 1979. (A dollar coin featuring Sacagawea, the Shoshone woman who helped Lewis and Clark across the plains, was produced from 2000 to 2008.) In 2003, the Mint released a quarter featuring Helen Keller, the writer and activist for the disabled.

On paper currency, the abolitionist Harriet Tubman is expected to replace Andrew Jackson on the $20 bill by 2030, according to the Treasury Department.

Representative Barbara Lee, the California Democrat who sponsored a bill promoting the new coins’ creation, said in a statement last year that she was proud to have led an effort honoring the “phenomenal” women who were often overlooked in American history.

She added: “If you find yourself holding a Maya Angelou quarter, may you be reminded of her words, ‘be certain that you do not die without having done something wonderful for humanity.’”