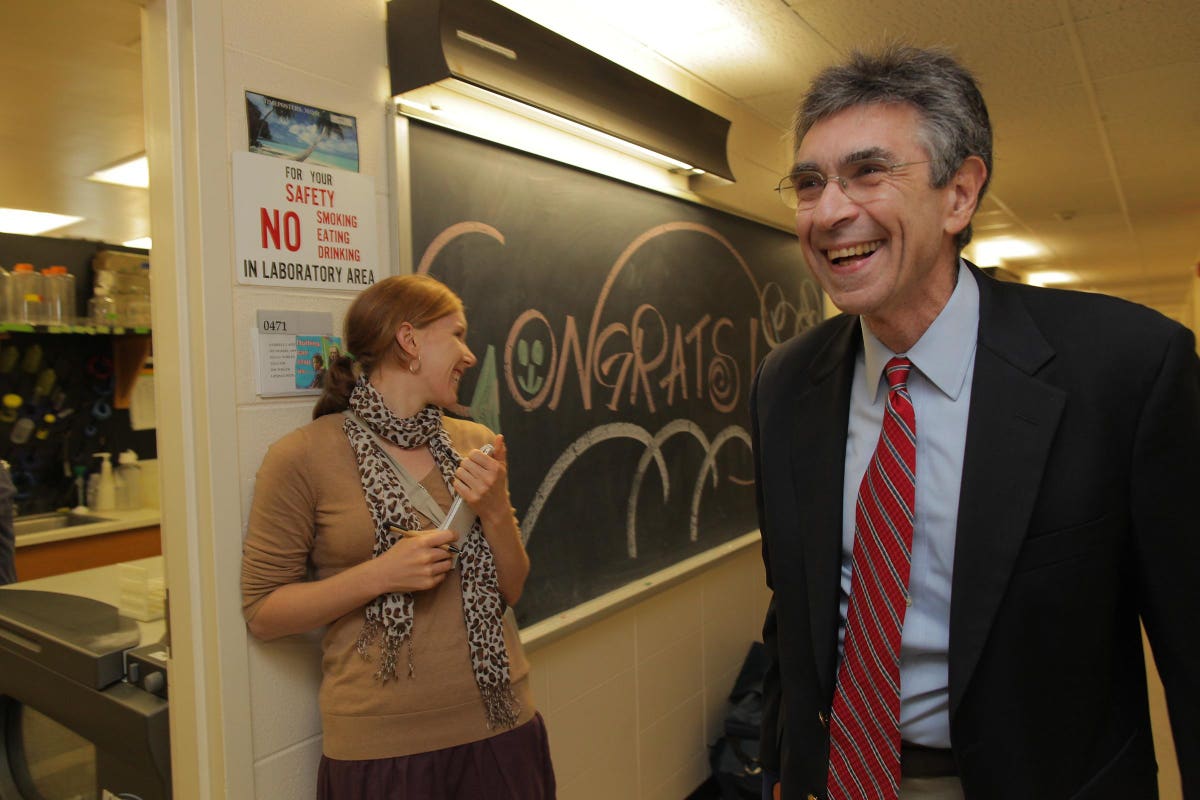 If your phone rings at 5 o’clock in the morning, it is usually bad news and your heart drops to your stomach before you say ‘hello’. But not this time. Not for Dr. Robert “Bob” Lefkowitz. On a dark morning on October 10, 2012, Lefkowitz was informed that he won the Nobel Prize in Chemistry.

My original research on success was on physician-scientists, those who are physicians, and also conduct research. That early research led me to Nobel Prize winner, Dr. Robert “Bob” Lefkowitz. “I should have gotten the Nobel for Medicine, not Chemistry” was his original response to me. I shook my head and thought to myself, “You got the Nobel, take the win.” Our interview all those years ago was one of my favorites as I was laughing throughout our conversation. When I learned that Lefkowitz penned his own autobiography with his former trainee, Randy Hall, I knew I had to read it.

Lefkowitz is the funniest and most upbeat Nobel laureate I ever met, and it is no

surprise that the press called him “the happiest Laureate” when he won his Nobel. His book does not disappoint as it showcases his vivid personality in technicolor. A Funny Thing Happened on the Way to Stockholm (Stockholm, Sweden, is where the Nobel Prizes are given out) gives you a front-row seat to the life, with all of its peaks and valleys, of Dr. Bob Lefkowitz. Nothing is left off the table, from his own terrifying fears of his cardiac disease to the jubilation of getting the Nobel Prize, including his daughter getting a marriage proposal in front of the King and Queen of Sweden.

Born and raised in New York, Lefkowitz finished high school at 16 and was graduated from college in three years. He completed medical school and started his residency training when the ‘Doctor Draft’ went into effect during the Vietnam War. Lefkowitz earned a coveted research spot at the National Institutes of Health, which counted toward his military commitment and allowed him to stay stateside during the war (read my recent article in Forbes about the exceptional research being done at that time by a group of doctors called the ‘Yellow Berets’).

Lefkowitz did not enjoy research at the beginning and was doing it out of desperation so that he could avoid going to Vietnam and stay with his young and growing family. His experiments were failing and his future as a scientist seemed bleak, or so he thought. His family was plagued with heart trouble, and he desperately wanted to be a cardiologist. He completed his time at the NIH and went back to his beloved clinical world. Before long, he missed research and begged a faculty member to sneak him in and let him do more experiments. He was hooked.

Lefkowitz is clearly a people person and loved talking to patients and his mentees. A true master mentor, he has trained 200 people and formed what he calls his scientific family tree. He turned down so many job offers that he had templates of “I’m turning down your offer” letters. He never became a dean or department chair, but not because he did not receive the offers. He received plenty. He simply did not want to. He wanted to focus on his research, his enduring passion, and training the next generation of scientists. Good thing, as in true Lefkowitz style, he not only won the Nobel, his former trainee was the co-awardee.

Perhaps what was most revealing in this deliciously self-deprecating book of a scientific giant, was that Lefkowitz was the first to admit when he did not know something. He learned chemistry and molecular biology from others who were more experienced. If he needed help, he asked for it.

The yearning to learn how to do something better did not stop with science. After winning the Nobel Prize, he was invited to throw a ceremonial first pitch at a Durham Bulls baseball game. Nervous about his pitching skills, or lack thereof, Lefkowitz asked his daughter, a former softball player for pointers. He practiced in his backyard with his wife, and then reached out to the Duke pitching staff for additional training. During lunch, his lab staff would go outside and practice throwing the ball with Lefkowitz. Asking for help, leveraging your strengths, and working on your weakness were repeated themes throughout this powerful book.

A Funny Thing Happened on the Way to Stockholm, will make you laugh when you are alone in the room, and open your eyes in disbelief as you learn of some of Lefkowitz’s shenanigans. Like his parents, Lefkowitz, a cardiologist was plagued with his own heart trouble, and you feel his fear with every passing page.

This book is a gift for those who need a reminder that success only comes before work in the dictionary. It is a lifeline of hope and a celebration of possibility. It shows you the power of great mentors who believe in you more than you believe in yourself.