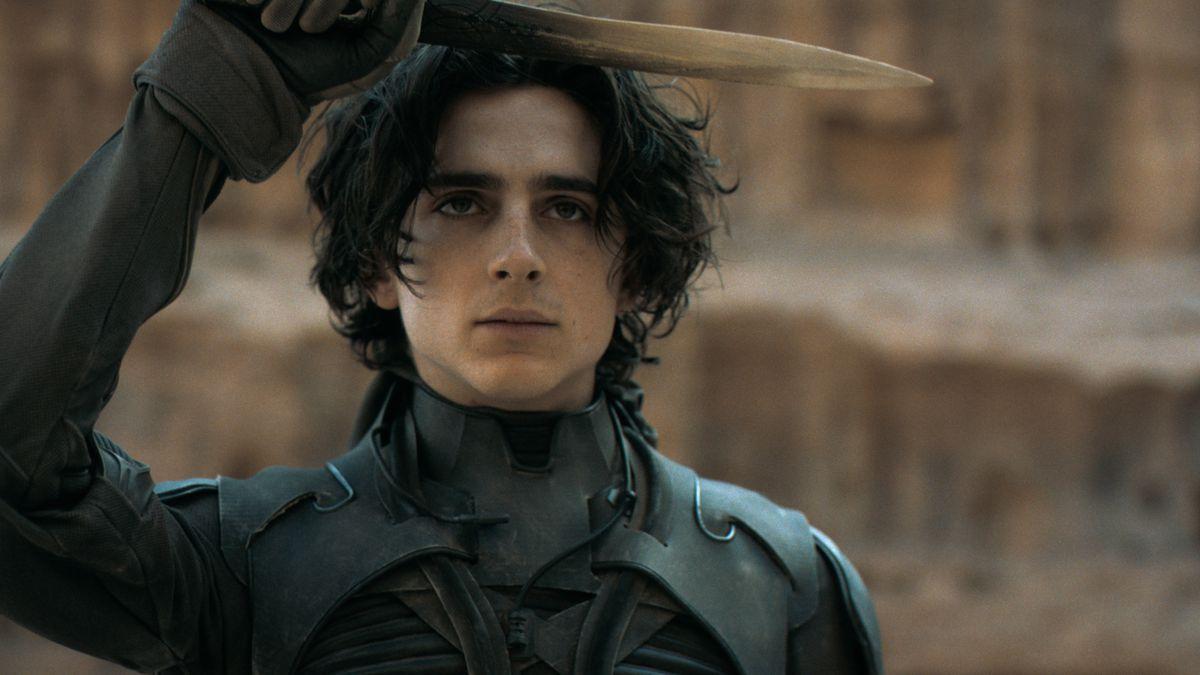 I have never read Frank Herbert’s Dune novels – I walked into the film blind, only aware of the story’s pop culture footprint, which is almost unfathomably large; you can see its influence in Star Wars, Game of Thrones, and Nausicaä of the Valley of the Wind.

Dune is another name for the desert planet Arrakis, a barren, unforgiving world where water is an infinitely precious resource. Unfortunately for the native people, the Fremen, the sands of Arrakis contain the most precious resource in the universe, spice, the shimmering dust that makes space travel possible; it’s also a powerful hallucinogen and mutagen, with the potential to enhance human cognitive abilities and extend lifespan.

It goes without saying that the Fremen have been crushed under the boot of colonizers for quite some time; Arrakis is too valuable to leave alone (given the story’s cultural relevance, it’s astonishing that it has taken this long to see a film adaptation).

Rather than a mix of colorful, exotic aliens, Dune is a universe populated by humans, some of whom have diverged from the evolutionary path, with the villain of the film, the Baron, appearing as a hulking monstrosity, with the eerie ability to float, via augmentations hidden under his cloak.

Scenes featuring the Baron hovering above his inferiors, or soaking in a pitch-black pool of regenerative juices, could have easily crossed the line into camp, but Villeneuve imbues these scenes with genuine menace.

Dune has an incredible amount of explaining to do, but manages to weave exposition into the dialogue without edging into the unnatural, or condescending viewers – not an easy accomplishment.

For most of the film, we are learning alongside our protagonist, Paul (Timothée Chalamet) who is growing into a position of great power, a path laid out for him long ago. The story begins as a tale of two rival houses, House Harkonnen and House Atreides, the latter infinitely more sympathetic than the former (think the Lannisters and Starks and you’ve pretty much got it).

While the Harkonnens have been managing the spice output from Arrakis for quite some time, and growing obscenely wealthy in the process, the Emperor (who remains unseen, so far), assigns the noble House Atreides, led by Duke Leto (Oscar Isaac), as the new rulers of Arrakis.

Leto is apprehensive, but jumps on the opportunity to build a better relationship with the Fremen, who are understandably skeptical, having seen many colonizers come and go. Through Leto’s attempts to establish a kinder fiefdom, we are introduced to this brutal, sun-baked world, watching weather-beaten machinery harvest the spice, impeded by relentless heat, billowing sand, and the presence of sandworms, the behemoths who produce the spice, creatures capable of swallowing a harvesting machine the size of a cargo ship.

As a movie monster aficionado, I was impressed by the sandworms; the beasts resemble some kind of parasitic microorganism, swollen to biblical proportions. In their brief appearances on screen, they feel like living, breathing natural disasters, embodying the film’s inhospitable landscape.

Intriguingly, there is also a quick mention of an uncompleted attempt at eco-engineering by the natives, who hope to turn Arrakis into a watery oasis, a goal that goes directly against the interests of the colonizers, who fear that the sandworms would cease their spice production.

There is so much story laid out for the future of these films that Dune doesn’t even pretend to be a standalone movie – it’s a lengthy introduction, successfully immersing the audience in this world of conflicting interests, exploitation, power, and belief.

It’s so easy for space opera to lose its sense of scale in an abundance of blurry CGI, but Dune reduces its puny human protagonists to ants, constantly dwarfed by vast, empty landscapes, ancient architecture, cathedral-like spaceships, and conquering armies, dominated by grand narratives and plans that have been in motion for centuries.

A series of betrayals eventually sees Paul and his mother (Rebecca Ferguson) left to fend for themselves in the desert, aided by the power of the Voice (the original Jedi mind trick), and by a seemingly manufactured prophecy that frames Paul as the Messiah.

It’s an incredibly compelling set-up, the beginning of a much larger story. Indeed, the film almost feels like the pilot episode of the latest experiment in prestige television; as soon as the credits rolled, I wanted to see the “next episode.” Hopefully, the box office results justify as many sequels as the books can inspire; Dune is the most exciting blockbuster franchise since The Lord Of The Rings.

If you’re comfortable with movie theatres, go and see it on the biggest screen you can – it’s worth it.