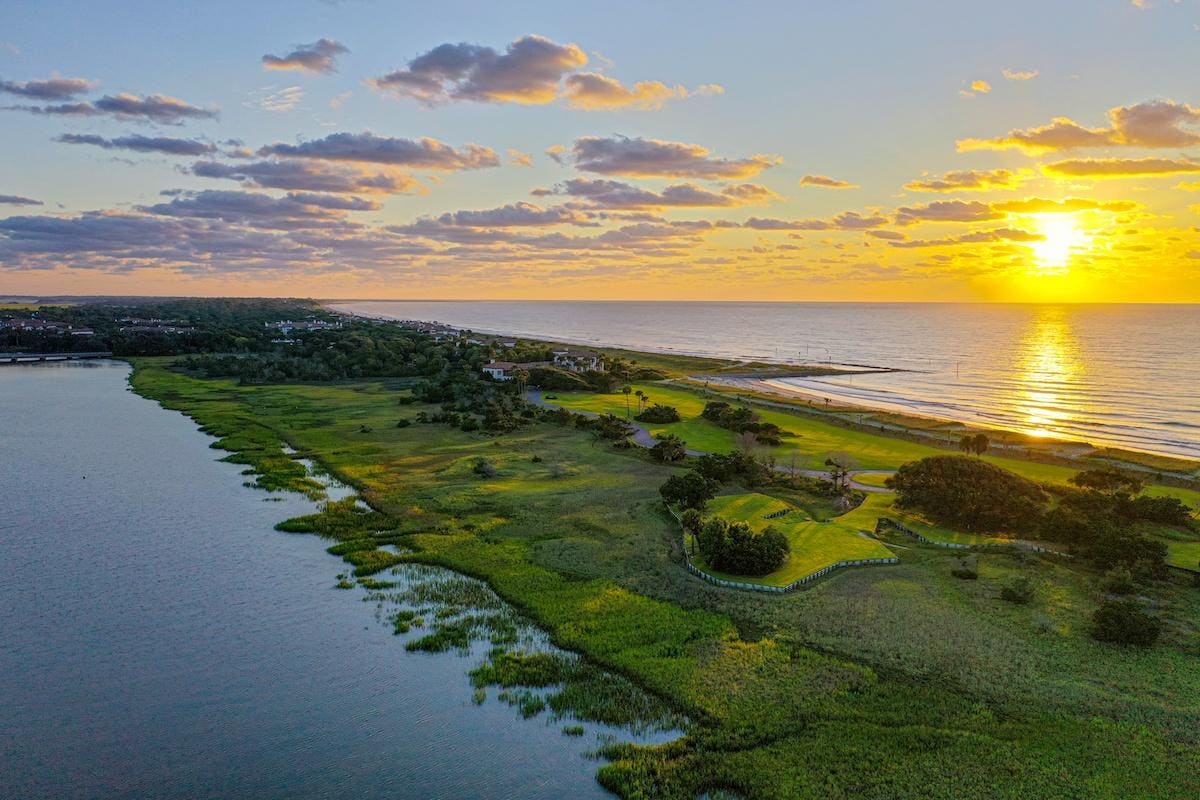 Hyperbole in real estate is as old as property itself. Yet, every once in a while a house or piece of land goes up for sale that actually lives up to the hype.

Which is why the sale of The Reserve At Sea Island—a 50-acre, oceanfront anvil of private beaches, dunes, palm trees, and tidal streams at the southernmost point of the iconic coastal Georgia resort—is already being called the next “Billionaire’s Bidding War”.

The Reserve is one of the last undisturbed, contiguous, neighbor-less private properties on the U.S. East Coast with the geography and pedigree to build America’s next, generational family compound that would rival anything the Carnegies or Kennedys could have imagined a hundred years ago.

America’s best and most exclusive hotels are debated constantly. Yet, when you strip it all away, there’s arguably no other more storied, well-heeled, or genteel resort in the U.S. than Sea Island.

Since its founding during the Roaring 20s, Sea Island has hosted more royalty, dignitaries, luminaries, celebrities, heads of state, and titans of industry than any other place else in the country including John D. Rockefeller, Edsel Ford, U.S. Presidents Hoover, Eisenhower, Ford, Carter, and Bush as well as the 2004 G8 Summit of world leaders.

Over time, that rarified guest list has inspired the transformation of what was originally built as a “friendly little hotel” called The Cloister on a remote, oceanfront barrier island into one of the most exclusive resorts in the world.

Sea Island now includes five hotels, three PGA-caliber golf courses, a dozen award-winning restaurants, and one of America’s most prestigious reputations for hospitality. It’s the only resort in the world that’s received Forbes Five Stars 13 years in a row and somehow still remains one of the most unique natural habitats on the planet—populated with more native species, old growth live oaks, migrating birds, pristine beaches, PGA pros, CEOs, and under-the-radar power families than anywhere else in North America.

So to call The Reserve’s sale at the tip of Sea Island a once-in-a-lifetime opportunity would actually be an understatement hyperbolically-speaking.

In addition to ten multi-generational memberships in the Sea Island Club—where the price of entry is a cool $150,000 per person and the short list takes a decade to get in—the sale of The Reserve includes the exclusivity of a private island lifestyle surrounded by 50-acres of undisturbed natural habitat between the Black Banks River and almost a full mile of Atlantic Ocean beachfront along with the privilege of being the last gated property within the most prestigious gated resort on one of the most exclusive private islands in America.

The Reserve also comes with the opportunity to build multiple homes—creating a true family compound potential—complemented by a private boat slip at The Cloister offering ocean access plus additional multi-generational memberships at Frederica Golf Club.

As for the seller?

Rumor has it that the Anschutz Organization that bought Sea Island in 2016 always knew that The Reserve would be Sea Island’s crown jewel.

So they carefully preserved 36-acres of the 50-acre point to ensure that they would never be developed and envisioned the remaining 14 acres as a legacy property planned for one family’s multi-generational estate along with the necessary staff quarters, guest cottages, boat houses, and out buildings to support the operations.

“The current owner took full ownership of Sea Island in 2016 and implemented a trust to secure the long-term stability and vision for the community to include the Sea Island Resort, club and resident experience,” says Thomas Liepman, Senior VP of Sales at IMI Worldwide Properties, which is exclusively representing the Anschutz family’s 100-year, multi-generational vision. “The Reserve at Sea Island was always viewed as the most cherished and unique real estate asset on Sea Island. It encompasses the entire southern tip of Sea Island and serves as the ocean-facing vantage point upon entering through the causeway. For this reason, the land needed to be carefully planned and managed.”

The ideal buyer for The Reserve according to the Anschutz Organization will have a passion for preservation and understanding of the stewardship that accompanies owning such a unique piece of the planet. The Reserve’s billionaire bidding war is also only available to qualified buyers through an invitation-only event, and comparable properties according to Liepman would fetch over $45 million. That said, the Anschutz’ “call to offers” is also intended to determine which owner would be the best fit for the uniqueness of the property.

“The historic development potential for the site included condos and hotels,” continues Liepman, “However the Anschutz Organization immediately shifted that focus to low-density residential, and after protecting the property lowered the density plan to one single family compound. This is a vision of land stewardship and doing what’s best for the community as opposed to achieving the highest commercial value of the land, creating a truly unique property that has no equal.”

On the “Why” of selling one of America’s last, great generational properties now instead of sitting on it for another decade, everything converged at just the right time says Liepman.

“Families are seeking greater privacy, more land, and a deeper connection to nature more than ever right now. And accumulating a remotely comparable property would take a tremendous amount of time and financial resources beyond imagination. Yet even in doing so the property would not be a private gated compound within a private community of such prestige. The Reserve at Sea Island provides a once-in-a-lifetime opportunity for a family to plant roots and sustain the land for years to come.”