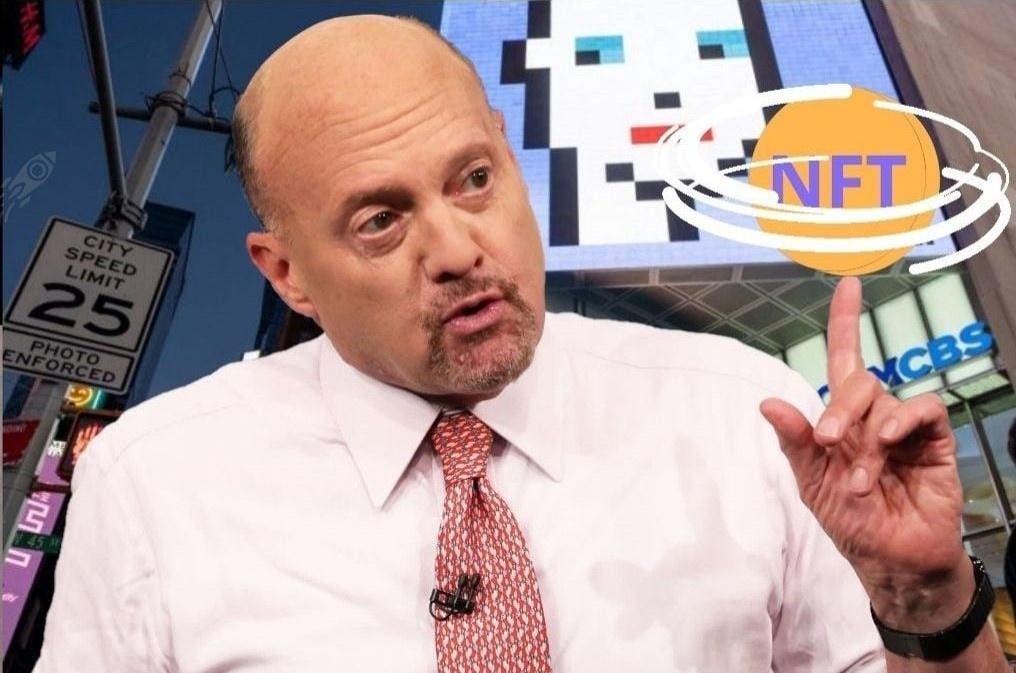 Watch this: in April, CNBC Mad Money host Jim Cramer said people buying non-fungible tokens (NFT) are buying things that don’t exist. “We have people trying to put prices on things that didn’t exist — think non-fungible tokens,” he said in April. He wasn’t saying don’t invest in them, but he was equating them with bubbles bound to pop.

On October 12, Coinbase, one of the biggest cryptocurrency exchanges used by retail investors, said it would add an NFT marketplace to its platform.  And so two weeks later, on October 28, Cramer said he was betting on the roughly $10 billion NFT market by buying Ether tokens.

“In all honesty, I was gambling,” Cramer said. “I was simply gambling on crowd psychology. I have no idea whatsoever why these things went up.”

Like the guys selling strange tokens in a bar in Tatooine in the Star Wars universe, we are all playing with these oddball chips, most of them only having value in one bar. No one knows why they go up.

I own Enjin coin as a play on NFTs. I have no idea why it’s been up 10% in the last week. Coinbase’s announcement happened over two weeks ago.

“The future has no gatekeepers,” says Tom Hale, founder & CEO of new decentralized NFT platform, Melon. “It’s an open future where creators, brands, and fans connect directly. We see a future where brand-creator collaborations and creator-to-fan relationships take place directly on a decentralized web. That’s a future with more power for content creators and their fans,” he tells me.

Maybe this is why Enjin is up. People are seeing the future more clearly.

Even stars of the investing world, like Cramer himself, cannot truly explain it other than an NFT is something for gamers purchasing to use in a particular game, usually on the blockchain, not on the X Box. It’s also digital art you – I suppose – don’t hang on your wall. Then again, NFTs are moving beyond art, and audio-visual clips.

This year we have seen sales of Jack Dorsey’s first Tweet, and in March, TikTok’s own NFT experiment saw a sale of over $500,000. (I don’t get it. Who is spending that kind of money on this nonsense?)

Hale names some social media stars that will work with Melon to create tradable NFTs:  SwagboyQ, Liane V, and Tim Chantarangsu, once known as Timothy DeLaGhetto. They have tens of millions of followers. Except for me. I have no idea who these people are. But imagine if they made an NFT? Perhaps it would be a money maker.

Coinbase expanding its footprint in NFTs should come as no surprise, as NFTs are reaching mainstream audiences. It’s totally stolen DeFi’s thunder.

Coinbase announcement marks another step forward for NFT creators because Coinbase is the de facto on-ramp for most retail crypto investors.

Coinbase also has an opportunity to lead the charge in expanding beyond Ethereum, the main blockchain for NFTs for now. Others are eating into Ethereum’s market share. Users have embraced a multi-chain future, and venues like Coinbase can align with that to maximally benefit their customers, thinks John Wu, President of Ava Labs, a team supporting development of the Avalanche blockchain.

Coinbase is not the first exchange to hop on the NFT bandwagon.

If you watched any baseball this year, and surely the playoffs, you saw umpire’s with the logo for FTX on their shirts. FTX is a crypto exchange. They sell NFTs as well. They hope to be the place where MLB players put up personal items for sale as NFTs.

Last year, a Brooklyn start-up called Voice launched a platform for creators to make and sell their own digital art. Voice is being billed as a cheaper alternative to Ethereum. They have joined other marketplaces, like Melon and early entrant OpenSea.

Because digital assets are the new stock exchange and everyone, even the pros, are diversifying into these assets. You can get in with a hundred bucks, and let it ride.

Think about what a $100 in Bitcoin would have been back when it was $15 a coin. That’s why you invest in this space. That’s why everyone invests in the crypto universe. NFT is the newest planet to form there.

Wu thinks that a mix of investing in NFT collectibles and the blockchains that support them is “a sound strategy.”

“An analog to the traditional world would be investing in both Sothebys, and the art they handle for clients,” he says.

As a cryptocurrency investor, I’d rather invest in a project that supports NFT sales (like Enjin), rather than try my lucky at buying the first piece of digital real estate created by a video game I’ve never heard of, let alone spent five hours a day playing.

Thinking like a serious investor for a moment, I asked Wu where he would invest if he wanted to invest in the NFT space.

He said it would be a “clean” investment thesis to “buy into projects that focus solely on NFTs.” But the utility of NFTs can, and will, go beyond art and collectibles. (There’s a project now selling wines, NFT-style.)

“We’re building our own NFT market platform for our own ENO Token because we see an opportunity for creating a marketplace for wine collectors that can use an NFT,” says David Marquez, blockchain marketing advisor to ENO, a project billed as a “decentralized wine movement to connect and spread wine culture around the world.”

The idea behind their new ENO token is that investors can own a bottle of expensive wine, but not really take ownership of it for their wine cellar. So with ENO, you can create a digital wine cellar and if you believe certain wines will increase in value, then you can sell them digitally. The real bottle will just stay in the vineyard. Maybe you’ll have your name on it.

Marquez has an OpenSea account. “My kids are in a couple of collector games like Pokemon that use NFTs,” he says.

“Projects with NFTs in gaming have a strong future because they already have a good use case,” says Fares AT (that’s what he goes by), founder and CEO of the Ghospers Game.

He says that investors looking for ideas should join Reddit, Discord and other NFT chat groups for intel.

“They will see just how many people love art. The new generation of art is here. What’s coming? I think StarAtlas, Mist, or any Gamefi NFT should be an interesting investment once they launch. Aurory comes to mind, too, due to the teams behind them.”

I’ve come to view NFTs as a mix of digital collectibles – be it images, or audio-visuals – and items for purchase in these new blockchain-based games (like a StarAtlas) that vary in terms of quality and depth of play.

I guess the newest games would be part of the metaverse, but I’ll save that for another time. (Billionaire Mark Zuckerberg is probably onto something again in changing his company’s focus from Facebook to something more reminiscent of the SyFy series Caprica back in the day.)

“Today we can purchase a digital piece of art, music or video which has value in and of itself. However, imagine if we could sell NFT’s to invest into impact projects, offering the opportunity for ongoing financial and non-financial returns, making the NFT a living thing?” says Glen Jordan, the co-founder of Empowa. He thinks the functionality of NFT’s is only just starting to be explored.

Empowa is using NFT as the basis for affordable home loans in Africa, where some countries will charge upwards of 30% interest on mortgages. Empowa is powered by Cardano. (I own it! Woohoo!).

When I look at their website, I can’t tell if, like Zuckerberg, they are truly onto something and we are moving into a whole new world; one we don’t quite have the language for, or the best use cases for yet. That’s one hand. On the other hand, I think this is going nowhere. But I am willing to bet that viewpoint is like looking at a URL code in the 90s and thinking that building a business on the World Wide Web will never fly. It’s just too hard!

Jordan’s idea is that the NFT is ready to break out of arts and entertainment. A project like Empowa “adds to the value of the NFT and appeals to a much broader market of investors and philanthropists,” he says.

Meanwhile, for Coinbase and other crypto exchange investors who aren’t ready to buy funky digital art, Wu has a warning: investors in platforms that don’t support a large number of crypto use cases like decentralized finance and NFTs — even the social tokens like what Empowa is after — “will risk losing out on the cross-over opportunities between these applications.”

Disclaimer: The author of this article owns Enjin, Cardano and Bitcoin.